After releasing their singles ‘Vain in a World’ and ‘9725’ with b-side ‘Eternal ft. Nordik Fire’, British-Danish synth pop duo Perpacity will now release their 14-track ‘Arise’ LP on October 7. The first three releases have already demonstrated the lush dreamy diversity of their sound with comparisons to Erasure, Depeche Mode and Yazoo (Yaz) abound.
Perpacity is a duo comprised of Ian Harling and Martin Nyrup, who reside in Bristol (UK) and Copenhagen (Denmark) respectively. Their music exhibits a strong command of melody and texture, characterized by unique dark moving electronic soundscapes and vocals to set your heart alight. This is genuine, unconditional love for synthpop or dance-pop.

Martin Nyrup started to craft music back in the days of the Commodore 64. Progressing to other synth and computer-related instruments and gradually mastering recording technologies, he fairly quickly got involved in writing music for the gaming industry. After moving onto the PC, he worked for various game studios creating music, game effects and conversions for the many soundcards of that era.
He met Perpacity vocalist Ian Harling when working in the gaming industry, who originally hails from the Isle of Man. Ian laid down vocals to one of Martin’s compositions, giving birth to Perpacity some eight years ago. Perpacity released their debut album‘The Sinner Inclination’ in early 2015, followed by the singles ‘Obscene’, ‘Save Me’ and ‘Volatile Cohesion’.
“When we set out to write the new album we agreed to not try to go for a specific mood, theme or atmosphere – that whether a song or a track made the initial cut depended purely on whether we like it and whether it speaks to us. We purposely allowed other genres to influence what came out of each song,” explains Martin Nyrup.
Martin’s musical influences include Depeche Mode, Yazoo, New Order, and Kraftwerk. These strikingly differ from Ian’s, who says Irish bands, both indie and folk, such as Clannad, The Cranberries and Plague Monkeys have deeply inspired him, as well as Elsiane and Sarah McLachlan.
“One of the reasons that Martin and I work well together is that we don’t have the same tastes in music, often quite the opposite,” says Ian Harling.
The ‘Arise’ LP was mastered by Alexander Kretov from renowned dreampop band Ummagma. On October 7, ‘Arise’ will be released on CD and digital download via the duo’s Bandcamp,
[bandcamp width=350 height=470 album=2164017169 size=large bgcol=ffffff linkcol=0687f5 tracklist=false]
[youtube https://www.youtube.com/watch?v=YtnfBrhBKq0&w=560&h=315] 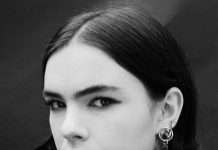