As TITAN put it, “We wanted the first single to be a song that people would be uncomfortable with and ‘Dama Fina’ works very well for that purpose.” Vice Noisey adds that “The video, takes that level of uncomfortableness even further, depicting a drug addled world where post-apocalyptic warriors sacrifice nymphs in rituals in order to produce purer drugs. Yeah, it gets that crazy.” 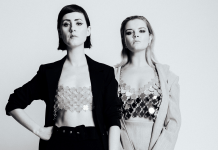