Some of the first people to recognize STEVE’s unique musical talents were renowned artists such as David Byrne, Dirty Projectors, tUnE-yArDs, Mac DeMarco, Dr. Dog, and elder statesmen like Lee Ranaldo and Built to Spill. STEVE is likely the only guitarist who has cut records with Sondre Lerche and Death Grip’s Zach Hill, been handpicked to open a sold out North American tour for Tame Impala and then provided guitar for Paul Simon‘s new record.
These wild artistic relationships came to be because STEVE happens to be one of the most talented songwriters and guitarists currently working. But they are also a direct reflection of the person, the soul of a guy any artist or fan who’s met him will identify immediately. It’s the same same soul that fills his songs.
This Is Steve, DELICATE STEVE’s first new record in four years, and first for the Anti- imprint, is an articulation of this spirit. A general communion with the people and world around him. Easy to call such things hackneyed in this cynical time, but in Steve’s case, it’s very hard to separate the person from the art. It’s real. It’s pure. This, Is Steve. An incredible capacity to write wordless songs that are impossible not to sing along to. He works in no genre, there are no words, but there is never a question as to what he is saying.
STEVE produced and played all the instruments on this record. He created it as an introduction from himself to you, and named it appropriately. If there is a question as to who This Is Steve’s creator is, you’ll find it imbued in these ten songs. As he has done from the start, STEVE lets the music speak for itself. Without a word.
“This Is Steve” Track Listing
Animals- 2:33
Winners- 3:20
Cartoon Rock- 2:03
Nightlife- 2:30
Tomorrow- 4:01
Help- 3:11
Swimming- 2:13
Driving- 2:20
Together- 3:11
This Is Steve- 2:41 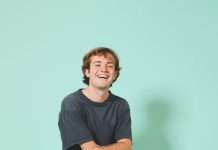