French electronic producer Astrobal has revealed the second single from his forthcoming ‘Memories of Stars’ EP, slated for release via German label Karaoke Kalk on November 24.
Known for combining psychedelic soundings with soft pop, ‘Belle comme la nuit’ is an offering that leans more towards French peers Telepopmusik and early Daft Punk. This single follows up on his release of ‘Australasie ft. Laetitia Sadier’, the EP’s lead track, with clever video produced by Patrice Curtillat (a.k.a. Poborsk).

TRACK LIST
01 Australasie ft. Laetitia Sadier
02 Belle comme la nuit
03 Le souvenir des etoiles
04 Tangerine Dream
05 Australasie II
[bandcamp width=100% height=120 album=1206502156 size=large bgcol=ffffff linkcol=0687f5 tracklist=false artwork=small]
Astrobal is the solo project of Emmanuel (Emma) Mario, who burst onto the scene in his native France through collaborations and production work with some of the country’s most cutting edge artists, including Laetitia Sadier, Arnaud Fleurent-Didier, Holden, Institut, Monade, Hyperclean. and Iko Chérie. It is no coincidence that the Stereolab songstress should feature on ‘Australasie’, as Emma Mario’s work as a producer and drummer for Laetitia Sadier has left an enduring legacy, rendering some of the most singular work from the iconic French chanteuse.
Mario has produced several Laetitia Sadier albums ‘The Trip’ (2010) and ‘Something Shines’ (2014), as well as the latest ‘Find Me Finding You’ album from Laetitia Sadier Source Ensemble, all three albums released through Drag City. He’s been extremely busy this year, touring as part of the Ensemble and sometimes even opening the show as Astrobal.
“Our blood runs hydrous with the seas/The essence of oceans spills through our veins.” Laetitia Sadier matter-of-factly unfurls these words on the opening track and they prove prescient. Astrobal’s wispy, French-accented vocals intermix with Sadier’s enchanting voice as she delivers spiritual and scientific information about the universe as if engaged in a shamanic incantation.
“Emmanuel became a long-time collaborator and he’s very good at working with other people, but there was also a desire to do his own stuff. He was kind of doing it before he started working on this project, but then I guess he found his focus and made this incredible piece of work,” says Laetitia Sadier. 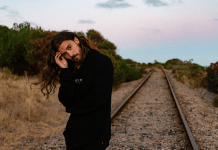