After “Summertime”, “Your Loving Arms” and “Check Out Da Bass”, Cristian Marchi is back with “Demons Out” for winter 2018. A very mature song to the DJ / producer Mantua born in 1976 in the last 10 years become one of the most famous DJs in Italy with its productions and especially for his countless evenings in the most prestigious clubs from Mykonos to Poland, from Korea to Australia, from France to Spain until you get of course Italy. Cristian is constantly on tour and with his progressive house makes you dance clubs and most prestigious festivals around the world.
“Demons Out” was written and performed by Eon Melka, a young French singer who has lived for many years in London and has also recently starred in “Hold Tight” by Ben DJ. 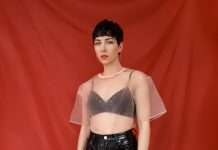