Hugely respected both as a DJ and authority on rare disco, funk and his own brand of ‘Soul In The Hole’, Chicago’s Sadar Bahar joins forces with Dutch synth-obsessive Ben Spaander for a very special 12” release, “The Red, White & Blue’s”.
A regular fxture at the world’s most discerning parties including Southport, Soundwave and Helsinki’s Flow Festival, Sadar Bahar frst joined forces with BBE in 2012, releasing acclaimed (and highly sought after) compilation album ‘Soul In The Hole’. Better known as Cosmic Force, electro veteran Ben Spaander has amassed an enviable array of synths in his Utrecht studio, using them to devastating efect in his productions and live shows.
Starting out working only with Ben’s synth collection and Sadar’s supreme ear for the groove, the pair soon enlisted help from some talented sax, guitar and keyboard players to give their new project a delightfully organic, live sound. Following hot on the heels of their debut release (‘We Are Righteous People’ on Rush Hour), ‘The Red White & Blue’s’ comprises four heavy grooving dance-foor cuts of varying shades. 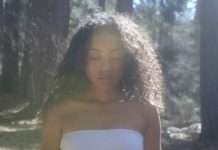 Hot 8 Brass Band Premiere "Can't Nobody Get Down"