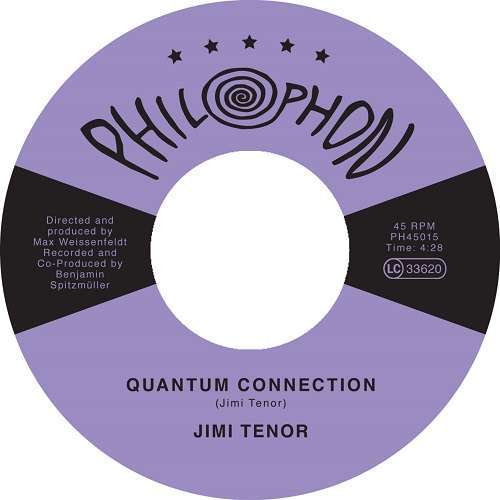 Named after the tenor saxophone, actually, Jimi Tenor is not just Jimi Tenor – he’s as well Jimi Keys, Jimi Flute, Jimi Vox and Jimi Composer. Yeah, he is, as a multi-instrumentalist and music master in general, all of this! But wait: Active since the mid-80’s he’s also Jimi Legend. And if you overlook his whole oeuvre then finally you will find out that on top of all of this, he’s Jimi Genius.

Quantum Connection is Jimi’s contribution to the recent Kraut-Life craze of Berlin’s underground scene. Kraut-Life is the brand-new hybrid of Ghanaian Highlife and German – here extended to Northern Europe, as Finnish kitchen is also kraut-based – romantic melancholy. A heavy and driving Highlife beat (yeah, it’s not Afro-Beat), screaming psychedelic sound-fragments and a sung desire for a subatomic love affair makes the song another undoubted original by Jimi.

My Mind Will Travel (Teen Party Edit) is a heavily danceable edit of the epic eight minutes version of that piece, which you can hear on Jimi’s upcoming full-length album Order Of Nothingness, released on Philophon this June. For Jimi, the physical world seems to be limited: but he is confident that his mind can dive deeply in the mystery of our micro and macro-cosmos.