Ninja Tune partnering with Monkeytown Records in order to present a brand new chapter – vol. 04 no less – in Modeselektor’s aptly named “Modeselektion” compilation series, bringing together an utterly enthralling and 100% exclusive collection of 17 free-thinking and boundary-pushing tracks from exciting upstarts such as Skee Mask, rRoxymore and Sarah Farina to exalted visionaries Peder Mannerfelt, Vatican Shadow and Modeselektor themselves who present their first new track since 2015. It’s a direct reflection of Modeselektor’s genre-defying DJ sets week in, week out around the world which, at its heart, celebrates invention, innovation and hybridity combined with a hearty commitment to moving dancefloors. Indeed, this has been the ethos from the inaugural release in the Modeselektion series in 2010. 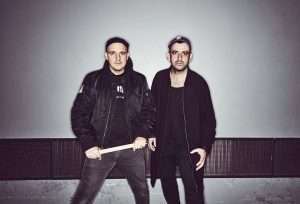 “The choice of tracks is influenced by our thirst for effective dance music. After almost four years of touring with Moderat, we really felt the urge to dedicate ourselves again to what made us”.

The album is released on 1st June 2018 as a two disc CD, digital album and for vinyl fans it will be available as four individual 12” EPs, or packaged together in a limited edition 4×12” slipcase exclusively available from Bandcamp, the Ninjashop, the Monkeytown store and Bleep. The iconic artwork, as always, comes courtesy of long term Modeselektor collaborators Pfadfinderei.

The Modeselektion 2018 tour takes in Italy, Belgium, Scotland, Germany, Poland, London, New York and Los Angeles and includes mammoth nights at Berghain in their hometown Berlin and at Fabric in London.