First Terrace Records presents over two hours of brutalist rhythm explorations from Japan, taking the form of a major retrospective of prolific yet unsung noise-maker Sofheso. Having been writing, performing and recording relentlessly throughout Japan for at least the last decade, the tracks that form this archival release have been selected from a huge quantity and variety of sessions, and arranged in a way that we hope serves as a fittingly monolithic (yet ultimately penetrable) introduction to Sofheso’s singular and thrilling creative vision. 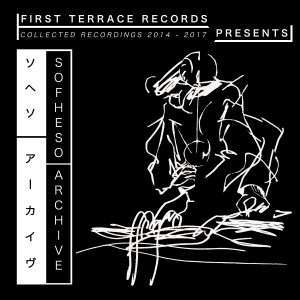 The sound is the process and the process is architectural, layering drums and short samples into a contorting mass of concrete and steel. In photography the camera lens enjoys a vast intricacy of scaffolding or the skeletal beginnings of a modern building much more than the glossy outer layer, and just so here. There is a deep satisfaction in hearing the construction, witnessing the casting of each new sculpture. Sofheso has created a sonic language entirely his own, with which he is able to articulate seemingly infinite rhythmic and textural possibilities.

“ARCHIVE” will be released digitally and as a limited run of deluxe double cassette tapes which will be housed in a butterfly case and printed O-card, and presented with numerous sketches of Sofheso’s live performances by artist Kan Togashi (who also features on the main artwork).

“Sofheso’s work has been a private obsession for a long time now. A new track will appear on his Soundcloud every Monday, and has done without fail for as long as I can remember (years it must be). But the slightly shitty nature of Soundcloud’s free account meant that every time something new would go up, something old would come down.

This project was driven initially through a selfish desire to hear all the tracks again – an urge which was satisfied thoroughly by the 11+ hours of music Iioka sent. All cuts from the last four years or so.
It wasn’t really our intention to do a 2.5 hr release but it became impossible to leave any more tracks on the cutting room floor. There is A LOT of mad shit that didn’t make it onto the tape.

All in all, it’s a special joy to get involved so deeply in something that began as a private obsession, and be able to share it with other likeminds. That’s what it’s all about!” – Joe Summers / FT