JP Cooper follows singles ‘The Reason Why’ and ‘Sing It With Me’ with ‘In These Arms’, out on the 24th of January.

‘In These Arms’ is an all-powerful torch song ballad, with Cooper’s voice soaring above a grand wall of sound. The lyrics pivot between unquestioning love and paranoia, whilst the verses classic, uncomplicated descriptions of precious time sets the scene for a sucker punch of a chorus.

To accompany the release of the single, JP has also shared the visuals for the track – watch them HERE.

Speaking about the single, JP says: “ ‘In These Arms’ is a song about addiction…through the perspective of being addicted to a person, knowing they’re not right for you and being in a prison by your own choice. It’s about constantly making excuses for the addiction and projecting romance on to it but ultimately knowing that it’s wrong. I think it’s something that most people would have been through at some point in their lives.. if not, it’s probably gonna happen…unless you’re one of the lucky ones. These are the relationships where you learn a hell of a lot about what is good for you, what you deserve and in turn, if we’re talking in the context of human relationships, what your partner deserves.”

‘In These Arms’ follows JP’s previous single ‘The Reason Why’, a breezy dancehall slow-jam featuring UK rap queen Stefflon Don and Banx & Ranx, and ‘Sing It With Me,’ featuring Astrid S. The personal reflections in Cooper’s debut album We Were Raised Under Grey Skies (complete with a piano-led Stormzy collaboration ‘Momma’s Prayers’) introduced him as a deeply affecting, soulful songwriter, and now these new singles find Cooper expanding his sound, imbuing his distinctive vocals and infectious hooks with modern energy.

The star has two UK Top Ten singles to his name: the Jonas Blue smash ‘Perfect Strangers’, which he co-wrote, and the inescapable radio hit ‘September Song’ (which has had over 600 million streams worldwide). JP has since notched up an incredible 10 million single units worldwide, a whopping 9.4 million monthly Spotify listeners and an extraordinary 2.4 billion streams. 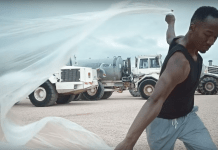