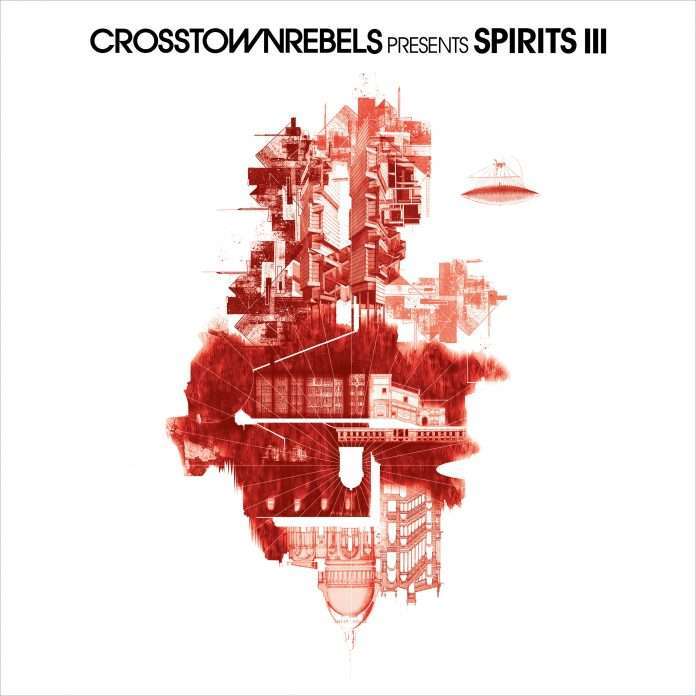 Crosstown Rebels presents Spirits III out January 24th, 2020
The world-renowned Crosstown Rebels add the third instalment to their annual Spirits compilation, an album which has become established for delivering some of the biggest hits that have been heard in Damian Lazarus’ sets over the past year, from some of the most esteemed artists in electronic music. Let your mind become absorbed in this collection of diverse and exciting tracks.

“The Spirits compilation series has become for me a very important annual mission in which my focus is to uncover some of the most exciting new underground music and piece it together in a way that makes a statement for the label. In discovering new artists and putting them side by side with established people we are setting new agendas for sound and for the future. These are battle weapons, freshly unearthed anthems, deep experiments and awakenings. Welcome to Spirits III“ Damian Lazarus

The man himself Damian Lazarus opens the release, setting the tone with the haunting hypnosis of Ergot which contains snippets of an ancient Chilean revolution song, relevant to the current political climate. Striking vocals play off one another on top of brass and strings in a call to nature on Dennis Cruz’s Mother Earth. Legendary producer Martin Buttrich combines frothing electronics with warm soul, creating a musical tonic during Slow Down. Aiwaska’s Creatures of The Night features starry melody wrapping around a classic deep house bassline and the distinguished voice of Jimmy Wit an H. The bumping peak time flavour of Transcend by Denney & James Dexter is energised by the powerful kick-snare and rolling bass over shimmering pads. More DJ ammunition is provided by Piem on Freak Out where a famous looped sample is manipulated to ignite dance floor euphoria.

Melancholic synth produced by Cipy, works in harmony with the expressive pop of Know Kontrol on Newark, carried by a subtle groove. Into the Light by Nohan creates an air of dark magic, as eerie strings and burning keys weave around shakes of percussion. The bounce of Adonis Rivera’s XX Acid will have you hooked from the outset, as you would expect from the title, razor-sharp acid awakens every sense in this heady piece. Next up Harry Romero adds a touch of romance on It’s You with an unravelling rhythm of heartfelt synth. Guti & Fosky collaborate once again in fine style to produce a smoky, late-night atmosphere, with the moody bassline and expertly crafted beat of Da Drumz. Album closer She’s Just A Wanderer by Eli & Fur is a mystical sunset composition that glows with the captivating vocals of Brothertiger and liquid melody that fades and washes over.

Crosstown’s sorcerer-in-chief Damian Lazarus continues to perplex and intrigue the house and techno scene through the label, Day Zero, Get Lost, Rebel Rave, his DJ sets and productions. MÜSE label owner and Spanish talent Dennis Cruz is a trend-setter, his fresh sounds receiving praise from BBC Radio 1, Mixmag and DJ Mag, whilst releasing stand-out material on Moon Harbour, Solid Grooves Stereo and Snatch! The legendary Martin Buttrich is famously as fluent behind a mixing console as in front of a virtual drum kit, resulting in releases on influential labels Planet E, Cocoon, Nervous and Desolat and also putting his sonic thumbprint on many big ticket-artists. Aiwaska is a new project from a mysterious producer with more than 20 years in the business, featuring a hypnotic spiritual sound with afro house rhythm and atmospheric bass lines.

UK Northern favourite Denney has achieved success through his hard work and dedication to the craft, his undeniable talent leading him to be picked up by Jamie Jones and Damian Lazarus, releasing music on Hot Creations and Crosstown Rebels alongside career highlights such as his BBC Radio One Essential Mix. Fellow UK star James Dexter has produced outstanding collaborations with Denney previously on Noexcuse and Saved Records, whilst also featuring on Poker Flat, Rebellion and MadTech. Barcelona born and raised Piem is a firm favourite on the cities club scene, becoming synonymous for his effortless performances. Also of Barcelona fame with a former residency at Macarena, Naples born Cipy has been playing all around the world since the early nineties, his sound has continued to evolve with his euphoric sets taking him to DC10 for Circoloco and Tree House Miami. Nohan is a music lover with a deep fondness for connecting sound and spirituality, he explores the many facets of sound originated from the Far East with select releases on All Day I Dream and RADIANT.

Adonis Rivera has become one of the biggest names to emerge from Venezuela, evolving his sound most recently into a minimalistic style that has been picked up by labels such as Deeperfect and Oblack. House music legend Harry Romero has released classic cuts like ‘Tania’, ‘Night @ the Black’ and ‘I Go Back’, with inspirations from his time in seminal New York clubs during the 90’s he continues to create dance floor ready tracks. With a huge back catalogue of impressive work that includes records on Desolat, Viva Music, Cadenza, Defected and Crosstown Rebels, as well three LP’s and a mesmerising live show, Guti’s electronic music fused with jazz and Latin roots keeps him a firm favourite for so many fans across the globe. The divine ‘Shiva’ by Fosky was the track that gained the attention of Damian Lazarus, leading to a full Crosstown Rebels EP alongside fellow South American Guti, this launched the fruitful partnership with multiple successful collaborations since. Following their debut release in 2013 and forming their NYX Music imprint, Eli & Fur have been perfecting a sound built around infectious melodies with deep driving bass lines topped with their distinguished vocals, gaining shows at Ultra Music Festival, The Warehouse Project, Circoloco and Coachella.