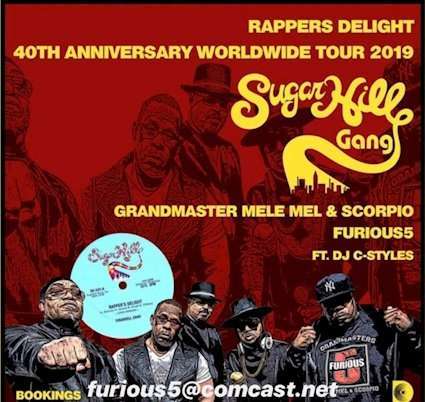 Hip Hop has come a long way. From its humble beginnings in 1974 it has become one of the twenty-first century’s highest grossing music genre. Firmly embedded in the landscape of popular culture, Hip Hop has taken over the airwaves, influencing music, fashion, television, film, art and dance for over four decades..

2019 sees the genre-defining Sugarhill Gang celebrating the 40th anniversary of their iconic hit ‘Rapper’s Delight’. Released on Sugarhill Records, the song was produced by Sylvia Robinson and features the songwriting talents of Chic’s Nile Rogers and Bernard Edwards. The first rap single to become a Top 40 hit on the Billboard Hot 100, it’s RIAA certified and twice Platinum. The song became an international hit, charting in the UK, Canada, France, Germany, Sweden, and Switzerland to name just a few. It has featured extensively on TV, in films and been famously performed live on chat shows across America, UK and Europe by A list celebrities from all fields and with varying degrees of musical talent!

“We are very excited to celebrate the 40th anniversary of ‘Rapper’s Delight’. An iconic and global success, it stands as a true testament of the power of Hip Hop music,” says the band’s Hendogg. “To see the crowds of people, generation after generation, sing this song and to be able to perform it all over the world is a blessing.”

The group in association with Ewing Athletics, will be releasing a trainer to celebrate the song. They also mark the 40th anniversary by looking forward to their next chapter. Along with fellow Hip Hop architects Grandmaster Melle Mel and Scorpio of The Furious 5, they have joined forces to form a supergroup. This is a hugely significant event in Hip Hop culture, these two groups put the genre on the map.

Grandmaster Melle Mel and Scorpio, along with fellow MCs The Creole Kidd, Keith Cowboy, and Rahiem, have created some of the genre’s most iconic songs, including platinum selling classic ‘The Message’, the first Hip Hop record to be inducted into the Grammy Hall of Fame and the Rock & Roll Hall of Fame. Anti-drug song ‘White Lines (Don’t Do It) was covered by mega new wave band Duran Duran in 1995, peaking at number five on the Billboard Hot Dance Club Play chart and hits like ‘Beat Street’ and ‘Step Off’ have become genre defining classics.

Through their alliance, these Hip Hop legends are already in the studio recording new music whilst booking dates for their 2019 US and European tour.

“This is history in the making. We’ve seen the evolution of Hip Hop and Rap go from a place where there was a lot of naysayers to it being a full-blown respected genre taking over pop culture. This Is amazing!” says Scorpio of The Furious 5. “To be successful doing what we love and now joining together to continue to make history is a blessing.”

Lisbon will host its first edition of Sónar in 2022