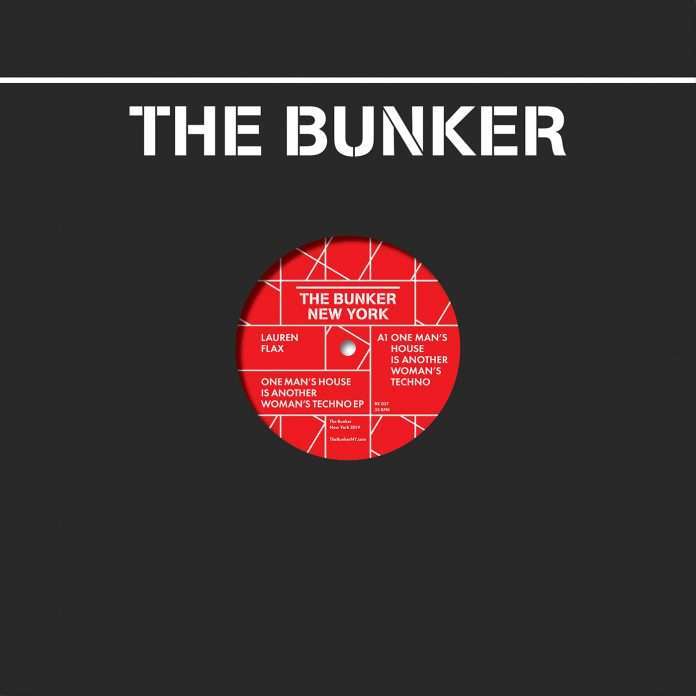 Lauren Flax is a Detroit native and long time Brooklyn resident who has been performing internationally for many years in a variety of projects and genres. She is known as a versatile and unique artist, an in-demand DJ and a producer with an extensive discography of original tracks, collaborations and remixes, including work with a long list of world class talent such as Grammy nominated artist Sia, Little Boots and Tricky. She has toured worldwide as a member of the successful trip hop project CREEP and can currently be found giving life to hedonistic dance floors worldwide.

The past year has seen Flax busy in her home studio, refining her analog hardware live set and working on her solo productions. One Man’s House is Another Woman’s Techno on The Bunker New York is the fantastic result of this work. All three tracks on the record maintain Flax’s presence and strong dance floor vibe. You may have heard bits of the record in some legendary DJ sets already or as a part of Flax’s killer live set, which was first performed at The Bunker’s 16 year anniversary party in January. “I basically start with just the drum machine…create some patterns to get me started…change the patterns and manipulate the sounds real time so that there is a truly performative aspect captured.” Acidic with a serious vibe, Flax makes sure to let us know “Everything for me has come full circle and I’ve definitely returned to my Detroit roots. Those roots run deep and so do my influences, but I also work very hard at maintaining and advancing my own sound. As for acid, it may have made a resurgence but for many of us who have been at it for decades, it was always present. I still can’t get enough.”