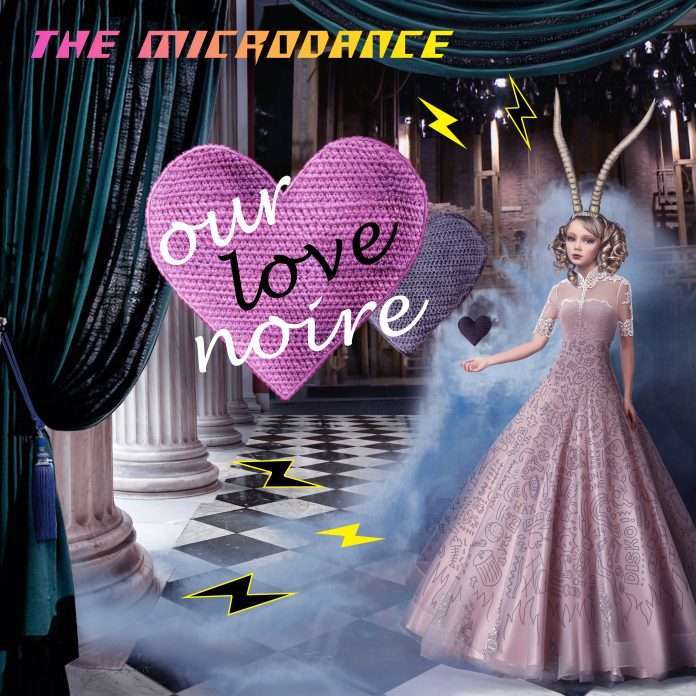 The Microdance are back with ‘Our Love Noire’ out through, the long awaited follow up album to 2015’s critically acclaimed ‘New Waves of Hope’, out through Somewherecold Records on the 19th of June

OLN sees the band push their sonic palette even further than the impressively diverse NWoH. The band has always been frontman and composer, Alex Keevill’s vehicle for covering everything he finds exciting about alternative music and this album goes a long way to doing this:

From the shimmering shoegaze, alt rock poppiness of opener ‘Lovesick Kisses’ to the gooey new wave, 808 driven ‘The Ride Today’ (when I played a friend TRT, they said to me ‘man, you’ve Outcured the Cure!) to the gamut running ‘Get Darker’ – complete with punishing riffage, delay laden dream pop passages and even a brief homage to black metal with John Ganner’s blast beats complimenting a furious and quite frankly over the top climax, to the reverberated acoustic whisper of ‘Felicity Attacks’, this album moves with equal beauty, brutality, darkness and light to take you on a journey that you probably won’t want to return home from – this is aural confectionary. Oh yeah and it has killer guitar solos a plenty – Keevill is not a dedicated follower of fashion!

It’s a deeply immersive album. Its abundance and variety of aural aesthetic makes it as quickening as it is demanding because this one demands your attention. That’s where the reward lies, The Microdance is a five listen band, there are layers upon layers here, creating a melodic subtlety that gives these songs formidable staying power.

Keevill describes what excites him most about the album: “Our Love Noire’ is a mix tape type affair. It’s the collation of a bunch of songs recorded in several studios with a varied cast of characters. It’s all over the place and I love that! ‘New Waves of Hope’ was a cohesive opus – I wanted that, It was all tracked at theLab studios in LA with Frankie Siragusa engineering and co-producing, Gavin Mata Hari on guitar, Nicole Fiorentino (Smashing Pumpkins, Veruca Salt) on backing vocals and Eric Gardner (Iggy Pop, Morissey, Moby, Cypress Hill) on drums. Whereas OLN is kind of thrown together – and I mean that in a positive light – the song writing process was different and there was no thought of whether something may be incongruous, for example, we wouldn’t put a song with 808 beats next to a monstrous guitar explosion on NWoH, but I welcomed that with this one. I was less prescriptive with both the songwriting and the flow of the album and I think that’s resulted in something very exciting. Surprisingly, it flows really well”
Although Keevill played 90% of the guitar on the album and bass on eight of the 11 songs that feature bass, thanks to his scope of musical and emotive influences, ‘Our Love Noire’ sounds like a band effort with an array of musical voices usually only afforded to a double album.

The album can be pre ordered on CD or digitally and the three singles preceding the release of ‘Our Love Noire’, out already can be bought here: https://themicrodanceswc.bandcamp.com/

All who purchase ‘Our Love Noire’ will receive a free copy of Keevill’s side project Captain Keevill & his Darkest Horses’ EP, ‘False gods & Wicked Lies’ here