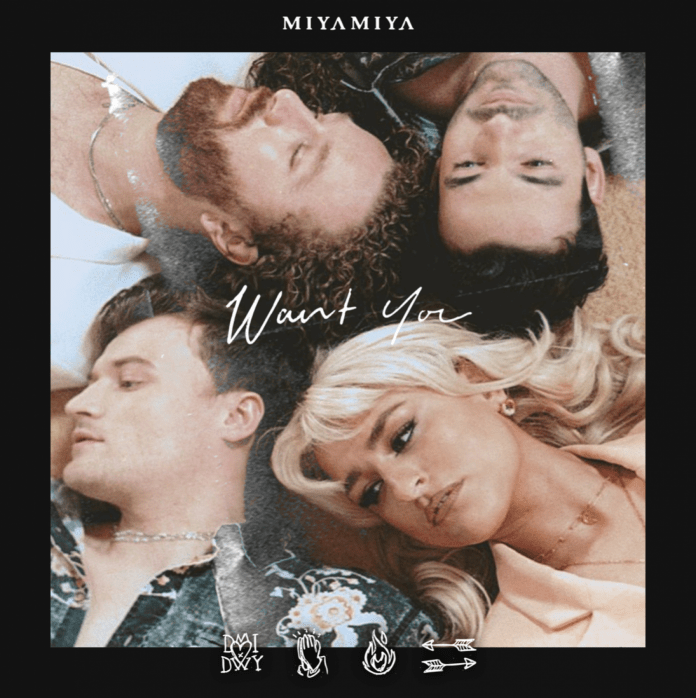 Rising British band MIYA MIYA are back with “Want You”, an addictive slice of anthemic pop – released via Alacran Records.

Serving as the official follow-up to the band’s well-received debut EP Cold Blood in June, it’s the impressive songwriting which initially shines through on “Want You”, delivering hooks which linger long after the track has ended. In the song’s lyrical take on a classic tale of romantic frustration and longing, MIYA MIYA’s main vocalists Gini and Jordan trade accusatory verses over a thumping bass line, before the track swells to a hugely captivating chorus complete with crunching guitars, layered strings and a relentless disco-pop groove.

Speaking on the track, the band shared: “We wanted to get out of our comfort zone and do something a bit risky with this one. It’s about love but it’s also about lots of things in life. Just because something isn’t easy, doesn’t mean it isn’t right. Sometimes you just have to figure it out. We now just can’t wait to perform it live.”

Comprised of vocalists Gini and Jordan, guitarist Gio and drummer James, the band met at university and got their bearings as a songwriting team; their work on Jonas Blue & Retrovision’s 2019 smash “All Night Long” saw the track hit No. 1 on the Billboard Dance chart and top streaming charts around the world.

From there MIYA MIYA was formed as a band in its own right, culminating in their debut EP COLD BLOOD; a cohesive, polished and shimmering five-track collection of pop gems, complemented by three entertainingly cinematic music videos for “Underwater”, “Hometown” and “Cold Blood”. Proving that they’ve got the magic hitmaking touch, MIYA MIYA’s songs, features & co-writes have amassed a whopping 35M streams.

2021 has started just as strongly for the band, co-writing the latest Jonas Blue song “Hear Me Say” alongside features on two internationally successful dance releases: Syn Cole’s “Feels Like Love” and GOLD RVSH’s fresh re-work of the Luther Vandross classic “Never Too Much”.

With MIYA MIYA’s emergence as a highly promising pop outfit over the last year, “Want You” looks set to cement their place on the cutting edge of British alt-pop with so much more left to offer audiences.