Grammy® Award-winning Artist, Global icon and ‘The Greatest DJ of All Time’ Tiësto, returns to Australia for a massive headline tour in March 2022! Always a favourite to Aussie shores, it will be Tiësto’s first time back down under since 2018. Joining Tiësto on this tour will be his good friend and one of the most successful young DJ/Producers over the last few years: Joel Corry. The tour will commence on Friday 11 March at The Dome Olympic Park, Sydney before heading to Brisbane’s BRC Doomben on Saturday 12 March and finishing at Melbourne Showgrounds on Sunday 13 March.

The production and staging of Tiësto’s Australian tour will be second to none and will showcase a spectacular visual and lighting show. Tickets go on sale at 10am (local time), Monday 15 November at Ticketek.

Successful DJ/Producer Tiësto has sold over 36 million albums, has 8 Billion cumulative streams, a social platform with an audience exceeding 30 million fans spanning the globe and he continues to revolutionize the dance music landscape.  His recent global smash hit: ‘The Business’ has dominated airplay and charts worldwide since its September 2020 release, garnering over 1 billion streams to date, it is certified Platinum in 15 countries, Gold in 8 countries and has held a place in the Top 10 official singles chart in 10 countries, as well as Top 50 on Spotify in 31 countries.

will be joining Tiësto on his tour to Australia. The past two years have been nothing but incredible for Joel.  His platinum-selling breakthrough single ‘Sorry’ spent 10 weeks in the UK Top 10 in 2019.  Next came further platinum hit singles ‘Lonely’, which peaked at #4 and the double-platinum ‘Head & Heart’ featuring MNEK, which scored Joel his first ever UK #1 and was officially verified the longest-running consecutive #1 record of 2020 after spending six weeks in top spot.  It was also later named the UK’s ‘Biggest Dance Single’ of 2020 by the Official Charts Company.  Joel followed up the success of ‘Head & Heart’ with ‘BED’ in March 2021 – a three-pronged collaboration with singer-songwriter RAYE and legendary DJ/producer, David Guetta.  It peaked at #3 on the UK Singles Chart to earn Joel his third UK Top 5 single in a row.

TEG Live is excited to be partnering up with NOW Entertainment.

NOW Entertainment is Jason Ayoubi & Mark James, two pioneers in the Australian Live Entertainment landscape.  With more than 25+ years’ experience, they are the Founders of ‘Future Entertainment’ and the crew behind some of Australia’s leading music festivals, including: Future Music Festival, Summadayze, Days Like This, as well as having produced and promoted well over 1,000 Tours.  Some of the world’s biggest names in Pop, Rock, R&B and Dance Music have graced our shores thanks to Jason & Mark, such as The Prodigy, Drake, James Brown, Swedish House Mafia, The Chemical Brothers, Rudimental, Katy Perry, Avicii, Fatboy Slim and more.

“We are absolutely thrilled to be working with one of the biggest and most-celebrated DJ/Producers on the planet in Tiësto, who will be one of the first major acts to come down to Australia in two years.  These shows will be absolutely huge and will help reignite the live space and get Australia dancing again!” – TEG CEO Geoff Jones

“Mark and I are super stoked to be working together again and with TEG Live.  It’s so great to be doing what we love and are so passionate about again, totally refreshed.  Stand by for some mind-blowing Tours and Festivals.  Starting with NOW This! the Tiësto spectacular and much more to come, into the future.” – Jason Ayoubi / NOW Entertainment 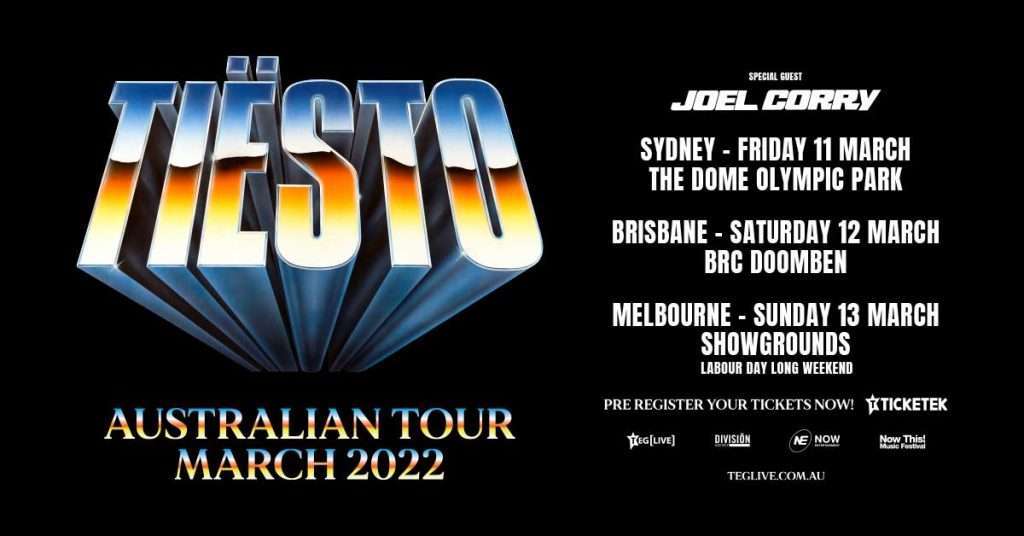