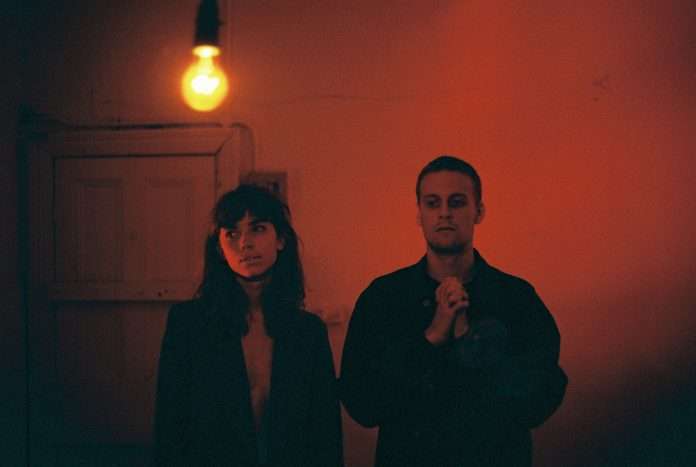 The Melbourne duo formed following the dissolution of their prior project, Snakadaktal. Since then, they’ve been writing, recording and producing their debut LP, which is due for release in the coming months. Today, the duo release the exquisite lead single, ‘I’m Tied, To You’.

A brooding masterstroke of dark electronic pop, ‘I’m Tied, To You’ exquisitely showcases Two People’s innate ability to simultaneously capture melancholia and euphoria. Set to a cascading bed of synths, ‘I’m Tied, To You’ steadily gathers pace, with Phoebe Lou’s crawling delivery offset by rave inspired key stabs that slowly unfold. Beautifully textured and deceptively complex, ‘I’m Tied, To You’ is a constantly transformative composition that builds to a dramatic crescendo, ruminating on the emotional intricacies of isolation in a way that’s both impactful and highly infectious.

“The words are written about being tied to yourself. There is a fragility and frustrated loneliness in that. It’s a kind of dialogue. Here, the ‘you’ is myself.

We had a great moment recording the ‘sax’ through our guitar amp and pedals. Joey was improvising in the final stages of production and the room sounded like a big dark rave, it just sounded right, we knew then that it was ready. We used that initial recording on the album, if you listen closely you might hear us yelling wildly and moving around the room.” – Phoebe Lou

Two People are behind all avenues of their creative work; from every detail of the music, to photo shoots and cover art. Protective by nature, the pair reached out to revered Scottish producer Rodaidh McDonald to mix, ‘I’m Tied, To You’, who has worked on records from the xx, Sampha, Adele and King Krule. Enthralled by what he heard, Rodaidh came on board to mix the single, later offering to mix the full LP at XL studios in London. Adding further to the Two People team, the project is now under the care of Melbourne-based management company, Good Manners – home of artists like Kllo and Planète.

Lately, Two People have been immersed in the live side of the project. Their aim is to curate a flowing set that exaggerates every sound, moment and feeling from the recordings. Two People were thrilled to announce that their awaited live show will launch at Splendour In The Grass in Australia this July.

‘I’m Tied, To You’ is the first new music from the duo since their debut single, ‘Fading’ and follow up, ‘If We Have Time’. Two People’s compelling sounds are influenced by artists like Portishead, Darkside and Warpaint.
https://web.facebook.com/twopeoplemusic/