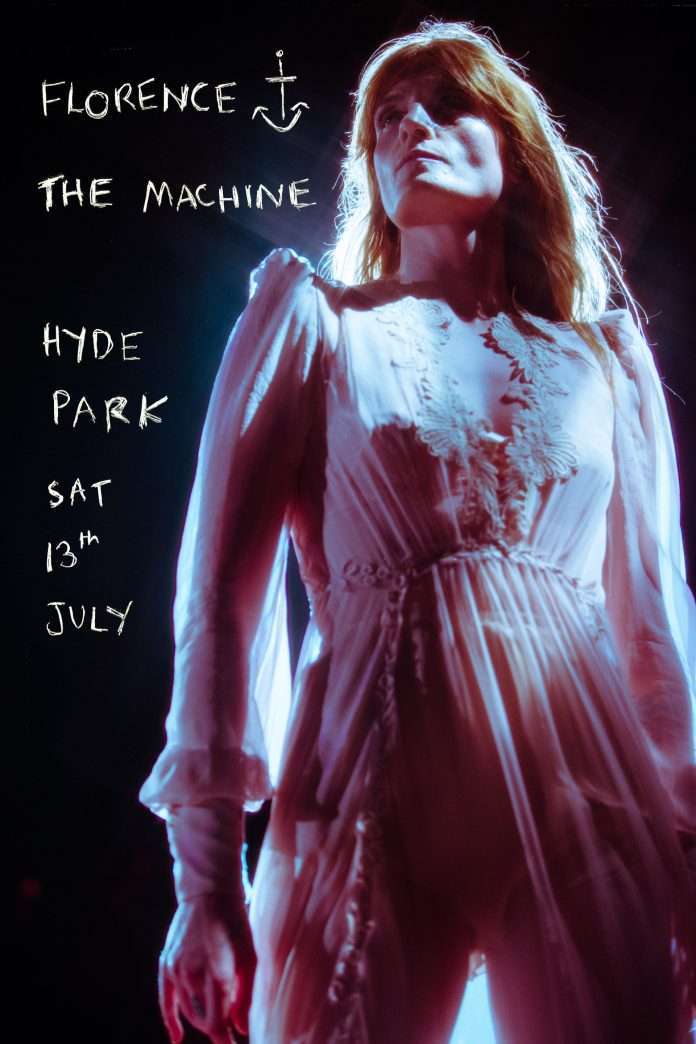 It’s been a remarkable year for Florence, whose fourth album ‘High As Hope’ already has the feel of a career-defining moment. Featuring the anthemic singles ‘Hunger’, ‘Sky Full Of Song’, ‘Big God’ and Patricia’, Florence started writing the record (which is also the first she has officially co-produced) in solitude in South London: routinely cycling to her studio in Peckham everyday to, as she puts it, “bang on the wall with sticks”. She took the songs to Los Angeles with her friend and co-producer Emile Haynie, opening them up along the way for collaboration with the likes of Kamasi Washington, Sampha, Tobias Jesso Jr, Kelsey Lu and Jamie xx. Florence mixed the record in New York, where the daily, reassuring view of that iconic skyline – often in stark contrast to the chaos of the wider world – gave the album its upbeat title.

What’s emerged – alongside the stunning new live show she will showcase at Hyde Park – is an artist who appears more certain of herself than ever. Florence’s recent tour in support of ‘High As Hope’ featured two sold-out dates at London’s O2 Arena and was greeted with across-the-board five-star reviews. With the album also landing Welch the third Mercury Prize nomination of her career, Florence + the Machine’s live return to London next summer is truly not to be missed.

Joining Florence are an American indie institution from Ohio, festival favourites and one of the most highly rated live acts around – The National, alongside Lykke Li, Khruangbin and the Mercury Prize-nominated Nadine Shah.

Barclaycard presents British Summer Time Hyde Park 2019 is back for another year of unique shows and unforgettable music moments, for the 7th year. Last year continued the tradition of must-see experiences that has seen The Rolling Stones return to Hyde Park, Carole King play her classic album ‘Tapestry’ in full for the first time ever, comebacks for The Strokes and The Libertines, Stevie Wonder play Songs in The Key Of Life and many more. Already announced for the second weekend of BST Hyde Park 2019, Bob Dylan and Neil Young on 12th July and Robbie Williams on 14th July.

Tickets for Florence + the Machine at British Summer Time Hyde Park go on sale this Friday at 9AM.

Hideout Festival Announces Second Wave of Huge Names for 2018, Including...