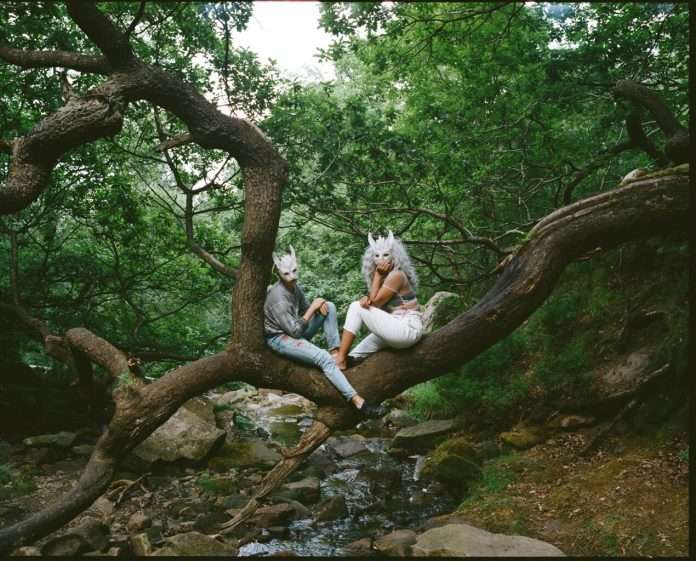 Enigmatic alternative-pop duo Jadu Heart have today unveiled the video for ‘The Cure’, one half of the band’s latest, double-A-sided release, ‘The Gloom That Looms’. This follows Jadu Heart’s incredible headline show at Omeara, which sold out in just a couple of weeks, whilst the band continue work on their much-anticipated album alongside the legendary Guy Sigsworth (Bjork, Robyn, Imogen Heap).

The video for ‘The Cure’, say Jadu Heart, “follows us on a journey through our daily lives in London. Halfway through the video we journey through to a more rural part of England to find a spot we had heard about where magic mushrooms grow. But when we find the forest, we notice that there are more peculiar life forms than just magical Mushrooms and pine trees…

The video itself (like all our videos) was shot and directed by us on a minimal budget. We found the orb a few days prior in a dusty workshop and managed to synthesis the goo using colour dye and wallpaper paste. We have a strict rule when it comes to video which is “work with what you got” and when we found the then grey plastic orb we thought “hey, let’s paint this and string it up in a forest! I’m sure we will think of some sort of story with it.”
https://music.youtube.com/playlist?list=OLAK5uy_m7qgjQyAUxMhZzrUfxAb73TmQwuBHVHQ0
The video to ‘The Cure’ is another intriguing window into the unique world of Jadu Heart: that rare band who have arrived, fully-formed, with a dizzying back-story to the supernatural characters they inhabit (but are in fact as much a part of them as their own IRL lives). Together, Diva and Alex are channelling the spirit of these creatures and writing music through them: the result is imaginative, cosmic pop, which sees Jadu Heart take classic tropes (tripped-out psychedelia, introspective electronica, alternative folk and soul) and breathe completely fresh air into them.

Already, the masked duo are creating a vivid universe around the Jadu Heart project. Early collaborations with Mura Masa’s Anchor Point label introduced the duo’s inter-dimensional sound, which continues to evolve (along with the narrative around the project) as they produced their expansive debut album alongside Guy Sigsworth. And despite such ambitions, as is evidenced on ‘The Cure’ and ‘Heroin Song’, this is ultimately heartfelt songwriting at its most creative – simultaneously intimate and cinematic, and a canvas that allows Jadu Heart the freedom to explore those monster-like qualities (the insecurities, fears, ugliness and beauty) true to us all.