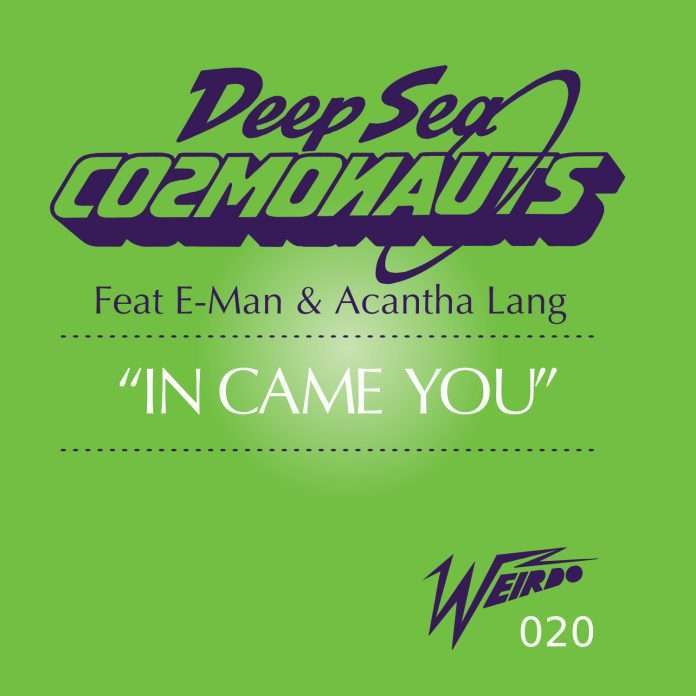 In Came You (Original Mix),taken from S/T Ep,out March 15 on Weirdo Recordings

British house duo Deep Sea Cosmonauts team up with New York’s king of the spoken word, E-Man (the voice of “It’s Yours” Jon Cutler) and songbird Acantha Lang on a heartfelt slice of dance floor soul titled ‘In Came You’. Originally penned 4 years ago with producer friend Mickey Simms, this unreleased gem was only recently discovered by Jason Herd who has snapped it up for his newly relaunched Weirdo Recordings.

An uplifting slice of classic soulful goodness, ‘In Came You’ is ripe with feel-good vocals, emotive stings, uplifting brass, bluesy keys and earthy percussive beats. Jason Herd strips things down, injecting some fresh beats and baseline action on a tasty re-edit before amping things up for the main room with a potent deep house and garage fused bass groover on his Weirdo Remix. Twisting things up nicely for Tech House town, Cabarza (Circus / Kaluki / Area remote) delivers a slamming dub primed with chopped up vocals, menacingly distorted cowbells all underpinned by a brooding bassline to smash the small hours.

Deep Sea Cosmonauts are London House music promoter / DJ Steve Harvey and pianist Davos. Steve was responsible for putting on some of the most prominent parties in the early 90’s from No Fat Chicks, Kinky Overdose and Que Pasa, as well as being resident at the legendary Club UK before gong on to carve an international DJ career for himself guesting all over the world. Davos’ talents came to public attention late in 2012 when a video of his piano performance of a medley of early Nineties house classics (drawn from his youth in Blackburn warehouse parties and raves in the late 80s) hit YouTube and went instantly viral, notching up over 120,000 hits in the first week and now over half a million on YouTube alone (with an estimated 4 million or more views netwide). The viral catapulted Davos into the limelight and brought him to the attention of some of the biggest names in dance music as well as two generations of acid house ravers and he hasn’t stopped touring since!