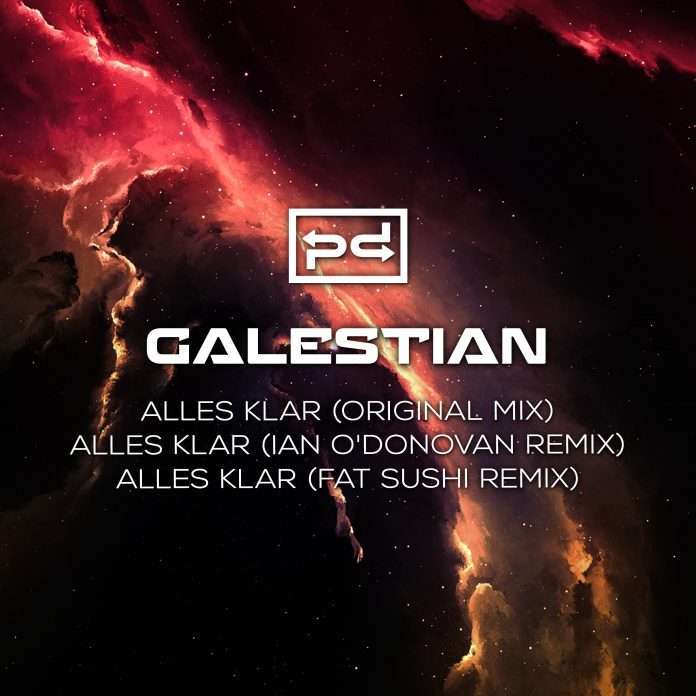 An artist with a strong profile, Arthur Galestian has been involved in dance music for over 15 years. Renowned in LA’s underground DJ scene with performances alongside Fehrplay, Grum, and Chris Lake, a nascent production career has seen Galestian come a long way since his 2015 debut for Sui Generiz, remixing Perspectives Digital artists, Kohra and SHFT. Indeed, it was “Rituals” that saw the American sign to Paul Oakenfold’s Perfecto Black in early 2018, with “The Gathering” following on the flagship Perfecto Records a year later. Other works for ICONYC, Black Hole, and Plattenbank is now complemented by the outstanding “Alles Klar”.

Opening with a chest-thumping kick, a sparkling arpeggio filters into sonic range with syncopated percussion, textured pads, and pulsating white noise washes. A glissando bassline adds to the aural collage in a track that rises and falls periodically in expert dancefloor fashion.

Hailing from the Dublin capital, Ian O’Donovan requires little in the way of introduction to the Perspectives Digital faithful. Responsible for the iconic “Forever Untold” for the label in 2012 including remixes from Satoshi Fumi and Estroe, the Irish artist has been at the vanguard of the underground dance scene with his distinctive melodies and crisp, immaculate production techniques. A regular on the likes of Drumcode, Bedrock, Intec, Tronic, and Einmusika, O’Donovan’s debut for Bedrock titled “Aurora Borealis” took the underground house scene by storm. August 2014’s “Dawnbreaker” collaboration with Nick Muir and Digweed himself was another notable highlight.

Now returning to Darin Epsilon’s imprint, the Ian O’Donovan remix is an elegantly crafted reworking that makes intelligent use of Galestian’s central arpeggio. Building a beautiful new chord progression that sits atop the musical framework in a shimmering halo, depth and texture is added to “Alles Klar” with a strong foundation and percussive groove that further guarantees dancefloor success.

Successful artists in their own right, the Fat Sushi duo joined forces in 2013 to devastating effect. With over 20 years experience in the underground dance arena, the Swiss duo have traveled across Europe with their captivating DJ sets, while a stellar production career has found Fat Sushi gracing such blue chip imprints as Suara, Stil Vor Talent, Katermukke, Einmusika, Natura Sonoris, DAYS Like NIGHTS, and their own Fat Wax Recordings.