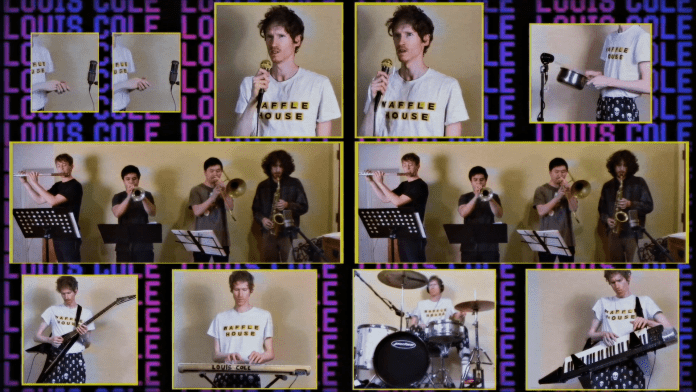 New EP “Live Sesh and Xtra Songs” comprises six unreleased songs and three live session tracks recorded in a house with a huge big band (heavy on the brass and wind sections) including Nate Wood and Ben Wendel from Kneebody, Jacob Mann, Sam Wilkes and Genevieve Artadi to name but a few.

“The live session was the day after my “Time” album release show in LA, so I just used the same band. I also got five of my friends to wear beekeeper suits to film and record the audio. Beekeeper suits are really cheap by the way. At the end of the day I had three really nice takes of those songs. We accidentally left the air conditioning on, there were cars driving by, aeroplanes, people living in the house, and I think at some point you can hear all of those things in the recordings which is perfect to me. The whole day was slightly blurry because I was frantically trying to lead the whole session and band, while trying to play the songs right (I messed up the ‘F it Up’ solo intro pretty much every time besides that final take), while also trying to problem-solve in the moment (microphones, snacks and shot placement), but the whole day felt like pure magic. So many friends coming together.”

Joy Crookes returns with heartbreaking new single ‘Since I Left You’