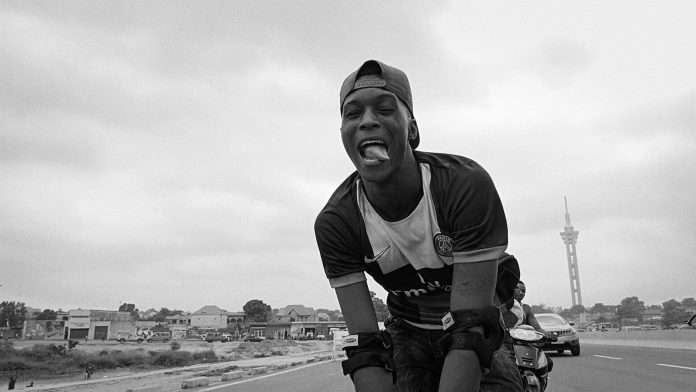 TSHEGUE today release ‘The Wheel’, the first new music from formidable Congolese singer Faty Sy Savanet and French-Cuban producer Nicolas Dacunha since 2017’s debut EP, ‘Survivor’. The EP drew the band fans amongst Mura Masa and Noisey, also spawning the video for single ‘Muanapoto’, which was shot on the Ivory Coast and went to be nominated at the UK Music Video Awards alongside tUnE-YaRdS and Chaka Khan. Watch the new video for ‘The Wheel’ (and stream the DJ Marfox remix).

Filmed amidst the chaotic traffic of Faty’s hometown of Kinshasa – TSHEGUE also taking their moniker from her childhood nickname, slang for the Congolese boys who gather on the city’s streets – the dynamic video for ‘The Wheel’ was directed by Renaud Barret, also behind the Africa Express documentary featuring Damon Albarn, Peter Hook and Tony Allen. A juggernaut of ricocheting beats, Dacunha’s insistent production on ‘The Wheel’ couches the rise and fall of Faty’s imperious flow – ‘Just keep your eyes on the road / Don’t Look Back / The last shall be /First’ – picked out in billboard black-and-white in Barret’s accompanying video, which tails teenage skaters hitching rides on the backs of buses, cars and motorbikes through the heaving megalopolis’ crowded streets.

Speaking about the video – which stars Club Etoile Rollers, a mixed-gender collective, some as young as 13, who skate the city’s streets – Renaud says; “An ordinary day in Kinshasa. I’m in a taxi on Lumumba boulevard, when suddenly I’m in the middle of this gang of kids slaloming between cars. We exchange thumbs up, signs of complicity, rolling side by side for a moment. One of them spots my camera, & comes closer to shout “Hey sir! Do you wanna shoot something crazy?” I couldn’t refuse. This is the magic of a limitless city where each and every day brings incredible spontaneous possibilities. Now as I watch the beaming faces of these kids, thrown at full speed on their crumbling rollers, almost out of control, intoxicated by danger and only protected by their faith in good luck; I can only see a metaphor for the Congo’s situation. But also a middle finger to a society trying to maintaining an illusion that everything should be controlled, supervised. These free riders remind us that life must be lived in the present.”

Faty herself relocated with her family from Kinshasa to Paris aged 8, with TSHEGUE going on to explore ideas about the challenges faced by the African Diaspora experience across ‘Survivor’. In her early twenties a mutual friend brought Faty into contact with Robert Wyatt-collaborator Bertrand Burgalat, whose cult Tricatel label has been referenced as a key influence by the likes of Air and Daft Punk. Burgalat encouraged and enabled her formative musical experiments – including a short-lived voodoo n roll band – until Faty was introduced to future TSHEGUE bandmate, French-Cuban producer Nicolas ‘Dakou’ Dacunha, whose hypnotic beat patterns form the thumping backbone to the band’s febrile distillation of elements spanning afropunk, garage rock and and electro-clash. Already making a name for themselves with commanding live performances (including packed-out festival appearances at the likes of Lowlands and The Great Escape), TSHEGUE will soon be announcing UK headline live shows to coincide with the release of more new music.