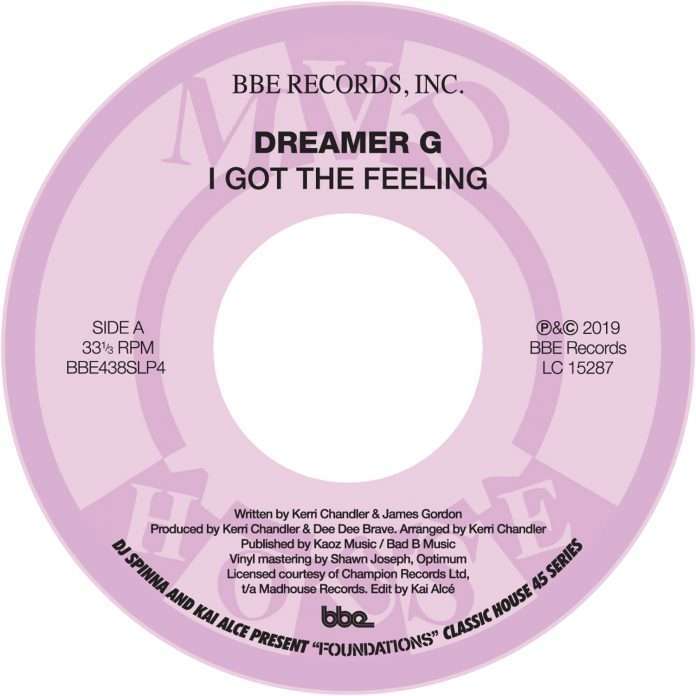 The 4th installment of DJ Spinna and Kai Alce’s ‘Foundations’ classic house series sees Dreamer G’s ‘I Got the Feeling’ and ‘Definition Of A Track’ by Precious issued on 7” vinyl for the very first time.

Produced by Kerri Chandler and released back in ‘92 on Big Beat / Madhouse, ‘I Got This Feeling’ is an iconic dance-floor track with a powerhouse vocal performance from Dreamer G. Edited specially for this 7” release by Kai Alce, ‘I Got This Feeling’ is simply a Kerri Chandler New York classic. As Kai Alce recalls: “I can remember riding into New York, going to the Shelter to hear Timmy Regisford and he played this. Just seeing all the people feeling it as the song describes is definitely a vivid memory!”

Produced by ‘Backroom Boys’ Cassio Ware, Derek-A-Jenkins and Dwayne “Spen” Richardson, ‘Definition Of A Track’ originally appeared on the 1988 EP ‘Back To Basics’, released on New York Underground Records. A full single release followed the next year (complete with a rap version titled ‘In Motion’), but it’s the raw electronic original Kai Alce has edited especially for this special ‘45. Says DJ Spinna : “This track reminds me of my early club days when the simplicity of a track could have as much impact as a powerful song in the club. New Jersey’s scene was breaking ground at the same time as NY and Chicago and this one banged hard everywhere!”

Tracks
1. I Got the Feeling
2. Definition of a Track