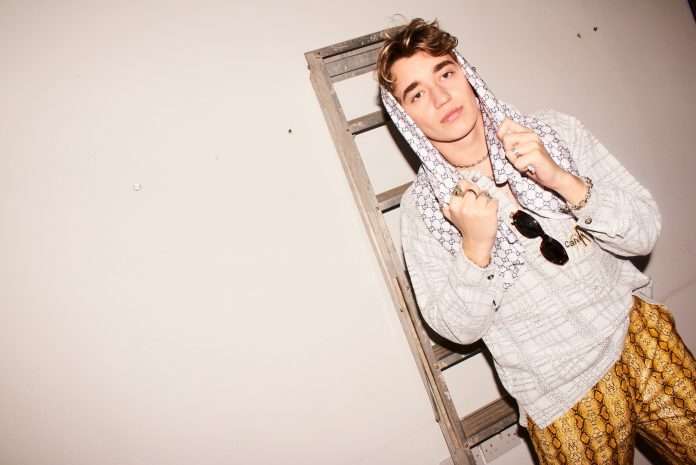 Barny Fletcher has today dropped his debut mixtape, ‘CANVAS2033’; featuring first single ‘Christ Flow’ – which has just been added to the BBC Radio 1 Introducing playlist – recent track ‘Blu Skyes’, also including ‘Found It’ (produced by DJ Shadow and with a video unveiled today). Barny played his first ever live shows this month at Live at Leeds and The Great Escape, and will take his explosive performance out on the road through the summer (with stops at BBC Radio 1 Big Weekend, Benicassim, Lollapalooza, Parklife, Longitude and Reading & Leeds).

‘CANVAS2033’ is a seven-track epic that moves between a dizzying array of styles – hip-hop, R&B, disco, and kaleidoscopic pop – on its journey towards a future as yet unknown. Or at least unknown to most. “NASA is expected to land on Mars in 2033,” declares Barny Fletcher, when asked to introduce his first project. “The thing is, I’ve already been, and it wasn’t all that. But hey, these are the songs I wrote on the way back from said excursion. Enjoy.”

Intergalactic in ambition, Barny Fletcher takes more immediate inspiration from those mundanities of everyday life. The positivity, humour and energy required to reach for something greater is encapsulated on ‘Found It’, which sees the still-just-21-year-old attract the attention of the legendary DJ Shadow to barnstorming effect. “Growing up, I never knew what I wanted to do,” says Barny. “Some people find it when they’re young, and some people never find it. ‘Found It’ is about realizing what you’re good at and just fuckin’ running with it.” And if ‘CANVAS2033’ is what Barny Fletcher is capable of on his first release – just watch him run with it.

Beneath the musical assurance, then, ‘CANVAS2033’ hints at unlikely transformation-story for Barny Fletcher. He grew up in a small Somerset village to a photographer father, filmmaker mother…and very little else to occupy his hyperactive nature. As he hit his teens, Barny listened to anything and everything, an approach that might explain the eclectic, genre-mashing style across ‘CANVAS2033. His early record collection ranged from the storytelling of Rodriguez and the skits of old-school Eminem to avant-garde humourists Bonzo Dog Doo-Dah Band. Having collaborated on the tape with the likes of Cadenza, Karma Kid, Jakwob and Ratboy, Barny began the year with a bang on ‘Christ Flow’ – a bombastic and brilliantly chaotic introduction to a world gone mad, with lyrics that appear as knowingly surreal as they are tender and affectionate. It’s this finely tuned balance that was showcased further still on ‘Blu Skyes’, a sunny-side-up twist on how to turn your current situation (financial, emotional, geographical) around.

And it all comes together on ‘CANVAS2033’: a colourful clash of sounds, cultures, ideas and nonsense, which – in the hands of a talent like Barny Fletcher’s – makes the absurdity of the modern-day feel like a genuine cause for excitement.