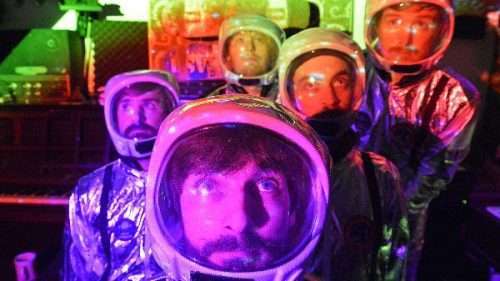 Plastic Mermaids are a five-piece band from the Isle of Wight who, after building their own analogue studio, have self-produced one of the most genuinely original and sonically adventurous debut albums you’ll hear all year: ‘Suddenly Everyone Explodes ’ out now.

The band features brothers Jamie and Douglas Richards, who collaborate on vocals, synths and samples, along with guitarist Chris Newnham, bassist Tom Farren and drummer Chris Jones. Jamie is the technical one, always on hand to build or fix whatever piece of kit they need. It’s important to mention that lots of times, obstacles were overcome simply by Jamie sitting for three weeks with a soldering iron and making the thing that we needed,” recalls Tom. “The desk that we recorded the whole album through, for example. Jamie just made that.”

Recent singles revealed from their new album include ‘1996’, ‘Floating in a Vacuum’ and their previous single ‘I Still Like Kelis’ all of which have been warmly received by fans and critics alike, supported at radio by Radio 1’s Jack Saunders, Huw Stephens, John Kennedy from Radio X (including a recent Xposure live session), BBC6 Music’s Lauren Laverne & Chris Hawkins.

“This album has been a long time coming,” reflects Doug, “and it feels great to have it finished. After three years of jamming, writing, debating, recording, gigging, multiple games of worms and copious caffeinated beverages we finally ended at this point. The album as whole has a broad twist of genres, vibes and sounds, I guess it shows the eclectic influences and the love we have for shovelling all sorts of music into are heads. “

Plastic Mermaids are the sort of band who pay attention to every detail. The cover art of ‘Suddenly Everyone Explodes’ depicts a model village with figures bursting into flame. It’s not computer generated – Jamie built the model himself and then went through setting light to each of the people in the scene one by one. “It does really exist as a three dimensional scene,” he confirms. The lake pictured on the cover art proved to be particularly tricky to get right. “We didn’t know what to make it out of, so we made it out of jelly,” says Doug. “Then it went mouldy.”

The band all spend a lot of their time in nature – particularly off the coast of their native island. “We all surf quite a lot,” says Jamie. “We’ve represented the Isle of Wight. It’s an influence on our music, in a way, because you’re spending a lot of time sat out in the sea, when it’s freezing cold, and sitting there in the sea, you’ve got a lot of time with yourself to think. I think surfing is more of an influence than anything else on me.”

In terms of musical influences, fans of The Flaming Lips, Arcade Fire, Sparklehorse and Tame Impala will all find something to love in Plastic Mermaids richly-textured sound. The Flaming Lips’ influence is also evident in their ecstatic live show which has manifested itself into the sparkly-gold-cape-clad choir that has recently been accompanying Plastic Mermaids on tour and a mannequin covered in mirror ball tiles who is often suspended above their stage set.

For the band, that sense of challenging themselves keeps it interesting. “It’s just nice to get out and do something different,” says Chris Newnham. “It makes it exciting. I don’t think we’ve ever done a gig where we’ve been 100% sure whether it’s going to go right. There’s something that’s kind of nice about that.”

No surprise, then, that it turned out Flaming Lips frontman Wayne Coyne was spotted enjoying the Plastic Mermaids’ own set at Blue Dot. After praising the band, Jamie is now working on a customised effects pedal for him.

Most bands wouldn’t go to those sort of lengths for their art, but Plastic Mermaids aren’t like most bands. More than just a record, they have created their own very idiosyncratic world. On ‘Suddenly Everyone Explodes’, you can explore it for yourself

You can catch Plastic Mermaids live at the following dates:

Track of the Day : Wlderz – Swimming in a plastic...