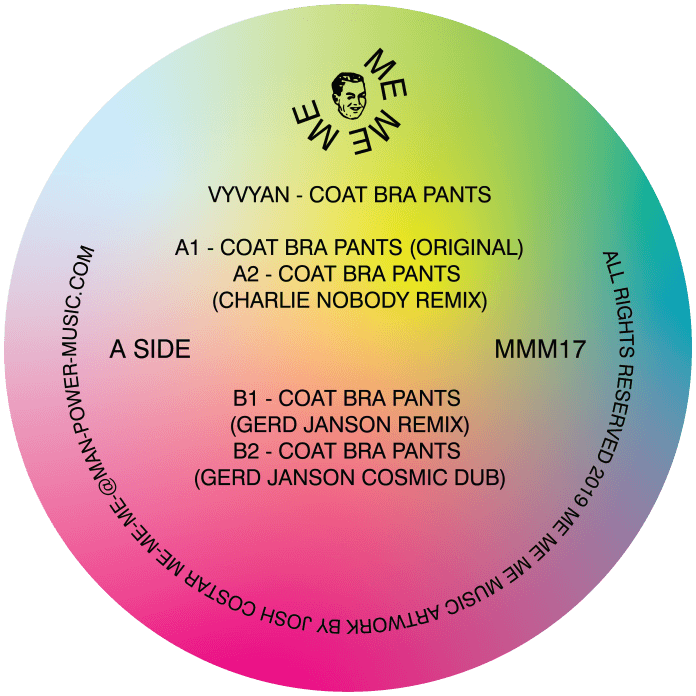 The enigmatic Vyvyan returns to Man Power’s mighty Me Me Me with incendiary new single ‘Coat Bra Pants’. Backed up with two remixes from Running Back’s Gerd Janson, as well as a debut remix from Charlie Nobody, it makes for another standout package.

This fresh new single further displays the unique, driving and hybrid disco house stylings of Vyvyan and acts as a perfect precursor to his debut album. That will land on Me Me Me in early 2020 and comes after a debut on the label last year. Nothing is known about the artist behind the music but the likes of Marco Carola, Metro Area and Roman Flugel have all been supporting it.

The new single here is a cheeky, low slung disco cut with dubby drums and old school piano chords. It bristles with life and authenticity as it builds the pressure and when it eventually drops is sure to get hands in the air punching along in joy.

First up on the remixes is Charlie Nobody aka Chris Stoker from Ess O Ess and Not An Animal Records. He serves up his first ever solo piece of released music with a psychedelic dose of dance floor arpeggiation nestled beside some sweetly balearic guitar playing. It’s a wild track that will lead to wild reactions.

Not content with a single bite of the peach, Gerd Janson has provided an out- and-out 90s New York house interpretation, as well as a separate organic dark- disco-dub version. Both pack a real punch as well as his slick studio tricks and are destined for plenty of plays this summer.

This is a typically colourful and creative new EP from Me Me Me that again proves Vyvyan’s production skills.