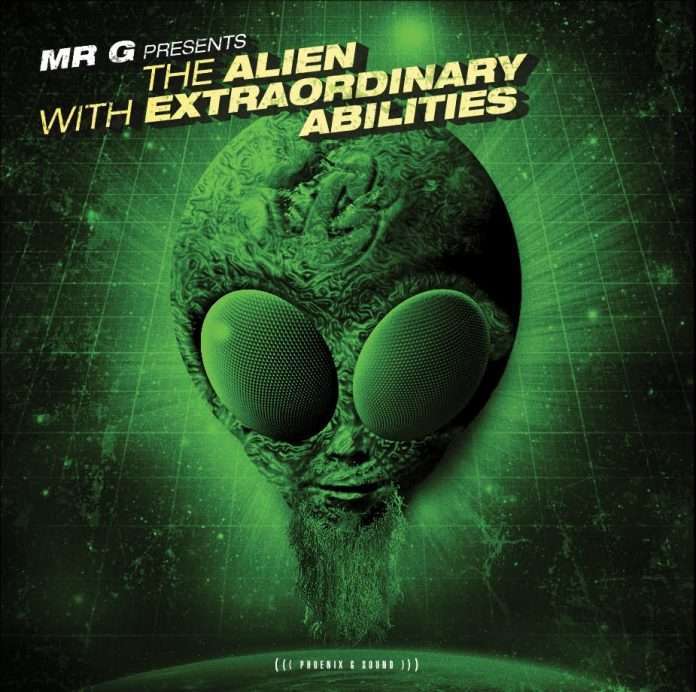 Mr. G has announced his new artist album, ‘Mr. G Presents The Alien With Extraordinary Abilities’, to be released on his Phoenix G label on 31 January 2020. The 6 track album – Mr. G’s eighth – features all new original material and will be available via vinyl, digital, and streaming formats.

‘Mr. G Presents The Alien With Extraordinary Abilities’ paints a picture of Mr. G aka Colin McBean’s experience performing a much-anticipated debut live show in the USA in Spring 2019. Each track represents a moment or setting from the trip – from the US Embassy visa interview (Embassy), a New York Loft soundbath and party (Soundbath @ The Loft), and meeting one of his own musical heroes, Danny Tenaglia (Met D @ The Gathering), through to the storm-ravaged festival that was the purpose of his visit, ‘The Alien With Extraordinary Abilities’ is the sound of his journey. The album itself was recorded after a studio hiatus of several months that followed McBean’s “confused” return to the UK. The release follows 2019 highlights including playing next to a breath-taking glacier at Iceland’s Secret Solstice, opening the main stage for Kerri Chandler’s Printworks event, his DJ set at SuncéBeat 10 in Tisno, his warehouse show in Toronto, and beyond.

Alongside this album release, 2020 will see Mr. G perform at Vent Tokyo, Rex club Paris, and more, with further tour dates to be announced in the New Year.

Mr.G has spent decades perfecting his craft as a DJ, live artist and producer – from a behind the scenes teenage selector who chose and handed the records to DJs to play, to someone who’s become an iconic figure within electronic music with more than seven albums and 120 EPs under his most popular alias alone. As well as being obsessed with new frontiers and his role as an ongoing mentor to up and coming producers, McBean is a genuine connection to the old school that epitomises a sense of authenticity. He was there in the nineties, playing the seminal May Day raves in Germany, and he performed at the original Tresor, back when it was a former bank.

As revered live techno outfit The Advent with Cisco Ferreira, they destroyed Sven Vath’s Omen club, toured the UK and Europe, Japan and states and played mega-raves like the one in the Olympic Stadium in Montreal back in 1999 alongside Carl Cox. Post-The Advent, he emerged as the Mango Boy, which is “the bones of what I am” and best represents his roots in reggae and dub. Then came his most famous alias, Mr. G, This identity has seen him become both a hot ticket at clubs and festivals, and someone respected for moving electronic music production forward, ever since.

Mr G’s music is real, never super cool and certainly not faddy. He lives it and breathes it, and you can tell. His own real life experiences inform what he does, from mourning the loss of his father via his Personal Momentz album to serving up a jazz-flecked, broken beat fusion album A Part Of Me Vol. 2 in 2018 after rekindling his love of those genres when prepping for a radio show on Worldwide FM.

Releasing mostly on his own Phoenix G. label, because he considers his productions his babies, so doesn’t like to adjust them for anyone, and he likes to get them out there as quickly as possible. He’s also landed on Rekids, Underground Quality and Bass Culture, plus Fred. P’s new label, tINI’s Part Of The Gang imprint, and Grade 10 international, who he also does a radio show for. He’s released such fittingly deep and raw music on seminal Detroit label Moods & Grooves that he is often mistakenly put down as hailing from the Motor City.