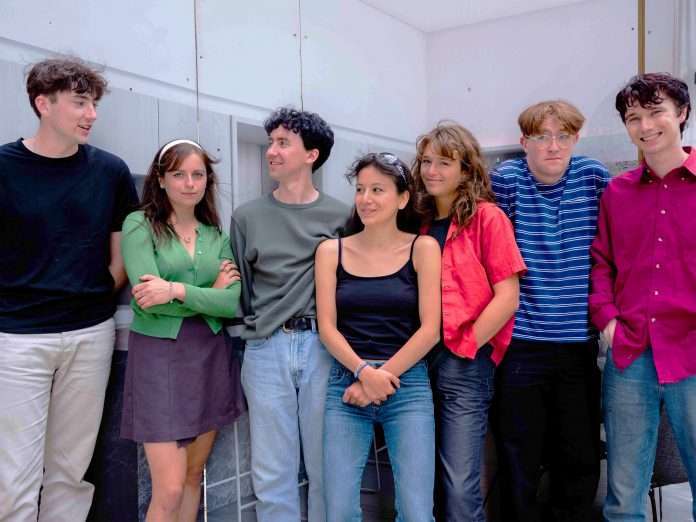 Black Country, New Road return today with the news of their signing to Ninja Tune, who will release their much-anticipated debut album “For the first time” on February 5th 2021.

Recorded with Andy Savours (My Bloody Valentine) during the early part of this year and then finished at the end of the nationwide lock-down, the album is the perfect capturing of a new band and all the energy, ferocity and explosive charge that comes with that whilst also clearly the work of a group who have no interest in repetition, one-note approaches or letting creative stagnation set in. Featuring six new songs including reinterpretations of early tracks “Sunglasses” and “Athens, France”, “For the first time” is a sonic time capsule that somehow manages to bottle the past, the present and the future.

“We wanted it to sound exactly how we love to sound live,” says saxophonist Lewis Evans. “This is basically representative of our first 18 months”, continues frontman Isaac Wood.

Indeed the band found they had to stop themselves running too far ahead in order to document this album in a way that felt as truthful as possible.

“We see this as being a stop in the road” explains Isaac. I’ve always been interested in a really honest portrayal of what a band is and what they’ve been working on. I think it’s really nice if people can see an artist like: this was them in the early days, this was their next phase and that they’re quite clear and honest about genuine progression as people and musicians.”

The band have today also shared the new track, “Science Fair”, alongside an interview with The FADER.

Minimalist and foreboding, “Science Fair” opens around their rhythm section, precise percussion and bass locking in to allow a residual build from the rest of the band, viola and sax loop and layer over fits and squalls from dual guitars, a synth break and an ever-anxious narrative laid down by Isaac Wood. Climbing towards his desperate exclamation of – “it’s black country out there!” – the song caves in on itself during a blistering, caustic final breakdown. Already a live favourite, “Science Fair” is paired to a video directed by Bart Price who said the following about its themes:

“When developing the music video for ‘Science Fair’, I was thinking about fictitious worlds that we visit through our screens, such as the American high school. Despite our lack of direct experience, these worlds become a universal means of communicating about and understanding things like what it means to grow up, or what it means to be in a friendship group, or to be in love. I wanted to create such a world around Black Country, New Road, placing their music at the heart of a small American town, that in a sense we’ve all been to and lived in.”

Despite having just those two early singles to date, Black Country, New Road – their name originally found on a random Wikipedia generator – have made an impressive impact on fans and critics alike. Declared “the best band in the world” by The Quietus, with glowing reviews from The New York Times to The Guardian, a cover feature for Loud & Quiet, a live BBC 6 Music session, selling out shows across the country (including 1700 tickets in London), being invited to festivals around the world including Primavera and Glastonbury, and finding themselves on French TV sandwiched between Sonic Youth’s Kim Gordon and Radiohead’s Ed O’Brien.

Their live performances gaining legendary status among fans of the emerging scene that coalesced around vaunted south London venue The Windmill, and which gave rise to many of their peers and contemporaries such as Fat White Family, black midi and Squid, artists with whom they have variously supported, toured with and collaborated with over the years.