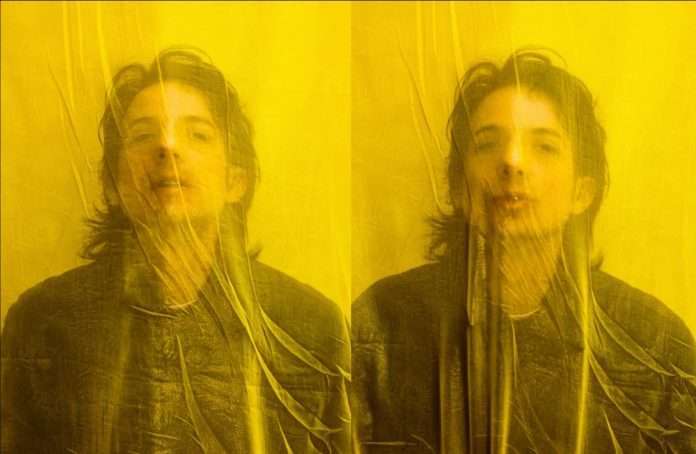 Lifted from Attawalpa’s upcoming ‘Patterns’ EP, out July 2nd – new single “Yellow Fingers” is a multi-layered tale of being bad and feeling good. Its accompanying video asks the same questions while pushing the boundaries of digital identity in a world where simulation and stimulation are hard to detangle.

An exposition of the singer’s past days of substance misuse and rescuing oneself from the brink, atmospheric synths brush against glistening guitar lines as Attawalpa’s looming vocal weaves round the cinematic, psych-tinged indie-rock instrumentation.

Speaking on how the song came to be, Attawalpa explained: “I started writing this song in a late night druggy jam at a gross, now perished studio I used to work at in east London. The lyrics can’t really be distinguished from the moment. I started free styling about ‘yellow fingers’ cos I’d been thinking about that weird cartoon ‘Salad Fingers’ – that character seemed to me like a bit of a mess head himself. Let’s just say I had been awake for too long.”

“Fast forward some years later and I was clearer, way more sober, finally conscious and digging out these old demos. Yellow Fingers was a fun one to write (or rewrite) because I had the clarity of time on my side. Patience is a virtue. Rather than write an anti-drug / anti-fun song, I wanted to show that although getting out of your head can feel so alive and sexy while it’s happening, eventually so can self control.”

Video director Sebastian Strasser said, “With the video I wanted to play with the battling desires at the heart of the song, creating contrasting dynamics with reversed gender stereotypes: a female hero roaming a digital world, fearlessly mangling men who disobey her rebel law. Meanwhile from the “dancers” perspective – he is rendered as a lookalike to Luis/Attawalpa. The story is about being saved from inescapable doom, the cycle of having to dance to the same music for eternity (addiction can feel that way, no?) In the end the hero does what heroes do: she saves the boy in distress, so he can rest his head on her strong shoulder forever.”

Upcoming EP ‘Patterns’ out July 2nd is a peerless showcase of Attawalpa’s undeniable stronghold of atmospherics and mood. Teaming up with Matt Allchin (Florence + the Machine, SOAK, George Ezra) to co-produce and co-write much of the new EP, his soothing melodies and honest lyricism evoke the future as much as the past, hinting at inspiration from the likes of Spiritualized and Lee Hazlewood for their song-construction and vocal delivery, and Aldous Harding and Julia Jacklin for their lyrical nous.

Across the ‘Patterns’ EP track listing there’s an overriding theme of healing. With a deft ability to appreciate the beauty in life amidst the sadness, Attawalpa neatly ties together intensely personal themes with vivid songwriting and instrumentation, creating a sonic palette that is very much his own.

No stranger to the industry, Felber was a touring and recording guitarist for Jamie T between 2006-2011, and more recently he has collaborated and worked alongside household names including Loyle Carner, Shame, Wolf Alice, Suki Waterhouse, Rat Boy, Jessica Winter + Pregoblin, amongst others.