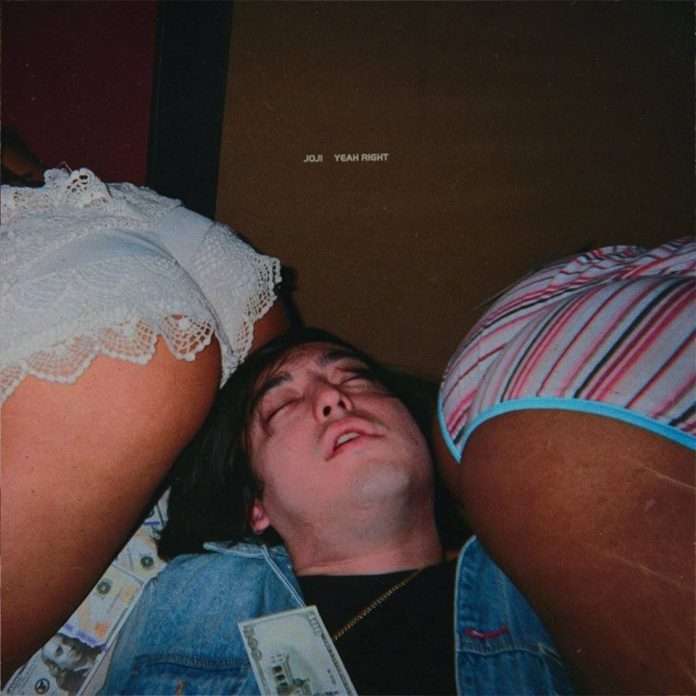 Japanese electronic R&B artist Joji has just released his first new music since February’s breakthrough ‘In Tongues’ Deluxe EP. Fresh from an extended studio hibernation, the vocalist and producer will also be taking his live show to a few festivals this year including 88rising’s Head In The Clouds experience in Los Angeles in September.

New single “Yeah Right” is entirely written and produced by Joji himself. Although the song seems like a superficial party track on its surface, after multiple listens it reveals itself to posess an introspectively warm and relatable self-loathing. The track’s muted samples along with its sultry drum machine hits and watery piano make for something special, sure to hold Joji fans over for what’s to come down the line from the 88rising artist.

“Yeah Right” is accompanied by a simple, yet smart lo-fi music video that shows Joji going through a series of mixed emotions as he almost reluctantly recounts the lyrics to his own song. Self-directed by Joji, the video perfectly captures the track’s underlying loneliness.

A master of multiple mediums, Joji is the Osaka, Japan-born singer and producer capturing a following from every corner of the Internet. The multi-talented visionary defies convention — his songs are characterised by downtempo, melancholic themes and soulful vocals, layered over lush grimy textures, blending elements of trap, folk, electronic, and R&B.

Joji’s highly anticipated debut EP project In Tongues was met with widespread acclaim, with lead single “Will He” landing the #1 spot on Spotify’s Global Viral 50 charts and iTunes R&B singles chart. ‘In Tongues’ was a triumphant debut of “dark, beautiful music held together by a subtle but strong sense of humanity.” (Pigeons & Planes) The EP debuted at #2 on the iTunes R&B albums chart and landed the #56 spot on the Billboard 200.

Earlier this year, ‘In Tongues’ received the remix treatment from tastemaking producers Lunice, Ryan Hemsworth, Lapalux, & many more in a Deluxe edition of the EP. To date, the In Tongues and In Tongues Deluxe has been streamed over 95 million times on Spotify. Each song off In Tongues was also accompanied by beautiful and groundbreaking visuals, including music videos for “Will He”, “Demons”, and “Window” — totalling over 45 million views on YouTube.

New single “Yeah Right” sees Joji confidently evolving on the signature sound he crafted on In Tongues. The single is an anthemic yet dark and brooding party ballad that only Joji can create, and gives just a taste of what’s to come on his full-length debut LP, due for later this year.

Joji is signed to 88rising – the team behind Internet-breaking sensations Rich Brian, Keith Ape, and Higher Brothers. 88rising is the pioneering media platform representing the most forward-thinking artists and creators from Asia. Bridging East and West, 88rising is known for its “slew of massive viral video hits and collaborations with established American artists” (CNN). Led by an award-winning team of creative visionaries all over the world, 88rising is “clearly filling a void,” (Forbes) by celebrating the unique cultural landscapes of Asia and beyond.
https://web.facebook.com/jojikansai/