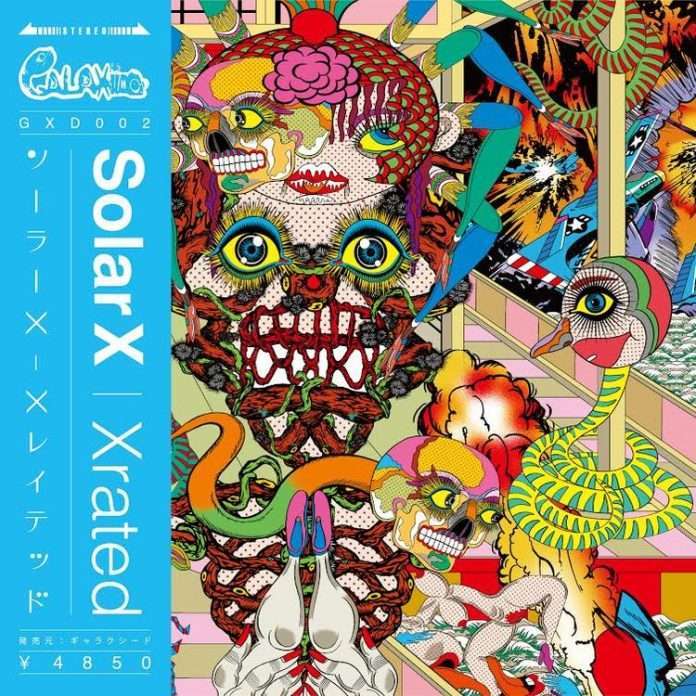 Solar X X-Rated
For the second release on the Galaxiid imprint, a label of electronic music archeology and quality, we are transported to the strange sonic world of an elusive 90s pioneer. Solar X’s 1997 album X-Rated will be released for the first time on vinyl, as well as reissued digitally, with new artwork by the Japanese artist Keiichi Tanaami. Two worlds connecting sonically, visually and culturally.

Solar X enjoyed a burgeoning career in post-Perestroika Moscow making playful, low-tech electronica from Soviet analogue instruments, which he masterfully configured to forge animated compositions and dancefloor rarities. Fascinated by chaos and complexity, his music explores the ways in which our minds can be manipulated by structure – an endeavour quite plausibly linked to his other career as a lecturer and researcher of AI, information theory and cognitive science, his interest in which was in turn triggered by his young experiments in computer music.

Solar X gained international attention at a time when Russia was (quite unfairly) seen as a vacuum for electronic music, but was exploding in the period of piracy, poverty and freedom following the collapse of the USSR. Young Russians had benefited from the soviet education system and there was a strong DIY computer programming and music scene, fuelled by hackers, gear freaks and party animals. Viewed from today, the album is reborn at a time of further political and social strife, which many see as fuelling the huge creativity and radical thinking of modern Russia’s young creatives.

X-Rated treats tempo and form as fluid concepts, administering sudden changes to its sonic landscape with disorienting effect, underlain with a subtle dose of humour and experimentation. Downtempo trip-hop sits alongside frenetic IDM and blistering electro, all bound together by peculiar melodic inflections and lively distortions. Warm, trippy harmonies and robotic synths are offset with angular drums, shifting erratically through moods and genres with cunning intent. Much like his contemporaries from the era, it’s his ability to breathe life into a humble production setup that makes his music so compelling some twenty one years later.

The track titles are from a book of call girl cards in London phone booths, that reached the artist in Moscow in 1995. “I liked the titles from these cards, which were self-promoting and offering pleasure (e.g. “Mistress awaits you”). So, I thought since my tracks also offered some kind of pleasure, they might as well advertise this through their titles.”

Label head Nina Kraviz was introduced to the work of the 83 year old sensei Keiichi Tanaami by Ukawa Naohiro, founder of Dommune in Tokyo, one of the brightest figureheads for the arts in Japan, responsible for the graphic design of the cover. In September 2017 Nina played for the opening of Tanaami-san’s first exhibition in Moscow at Gary Tatintsian Gallery. Nina performed a live sound palette, to accompany the looping 7 minute animation, of experimental music from the Soviet Union, Russian pioneers of electronic music like Species Of Fishes and SolarX, Soviet-time pioneer Lev Termen, Kuryochin, avant-guard rock mixed with some Stockhausen and just pure abstract sounds, as well as treasured artists like Biogen.

Tanaami‘s illustrative work has strong sexual elements, so out of the five art pieces Nina selected and commissioned for Galaxiid, the first fits perfectly for ‘X-rated’. The vertical line of text on the left is the traditional form for Japanese covers of foreign releases. The cover, together with the accompanying poster and sticker, are printed in Japan to ensure the highest print quality and purity of the colours.