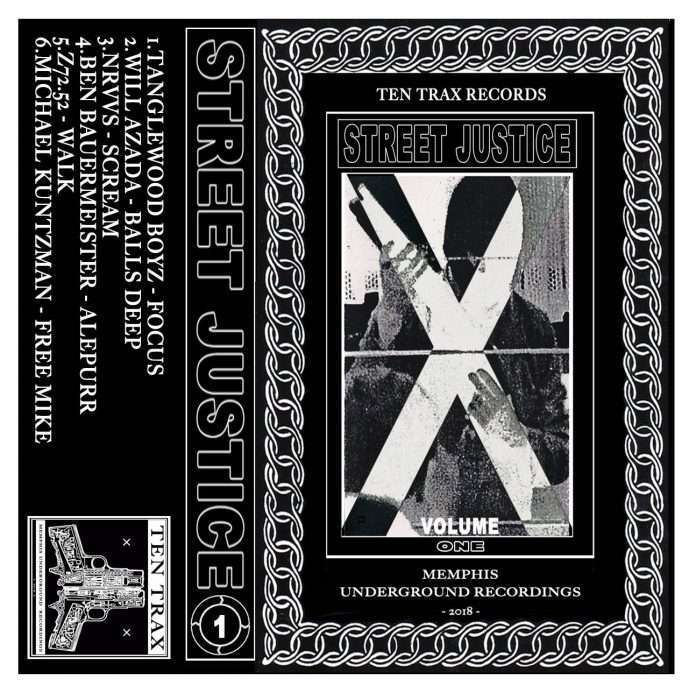 Hitting the streets April 5th, the first installment of the Street Justice series is all killer no filler, exploring several significant dimensions of the underground dance precinct. Highlighting exclusively Memphis based artists, the mini compilation spans six tracks which are scientifically proven to make heads bang and trunks rattle. The TEN TRAX mission is to promote the under-credited electronic heat produced in the southern sector of the United States, and there’s no better place to start than this VA.
release date April 5th, 2019
The first track comes from the elusive and formidable Tanglewood Boyz. ‘Focus’ is just as much Memphis hip hop as it is techno with its lewd, viscous vocals, paralyzing sub bass, and mangled hi-hats. This tune may be NSFW, but that’s just how the Boyz roll. Raveboi Stunna Clique 110%.

Next comes an acid-laced techno screamer from Will Azada, head of Proper Trax and Southern Techno pioneer. ‘Balls Deep’ features Will’s pitched down, tongue-in-cheek vocals juxtaposed against a perverse acid line that can cut through steel.

Closing out the first half of the record we see young gun NRVVS step up to the plate and deliver an absolutely devastating bass-ridden techno cut that’s sure to alert your neighborhood watch. Lacerated percussion meets crushing sub frequencies— not for the faint of heart.

Serving as a lucid breath of fresh air, we’re met with Ben Bauermeister’s eloquent ‘Alepurr.’ In mere seconds we’re taken back to the days when Autechre, μ-Ziq, and AFX dominated the minds of eager and open-minded listeners. Reminiscent textures meet soaring melodies, culminating in a blissful yet alluring composition.

Strutting onto the scene comes z72.52 with his erotically iconic track ‘Walk.’ Contrary to the previous four cuts, ‘Walk’ possesses a distinct sexual energy that, although bright and lively, is guaranteed to bring people to the dark rooms. Chopped and screwed vocals befriend heavy drum patterns, causing the track to go left when you think it’s about to go right.

Closing out the EP, we have the electro thumper that is ‘Free Mike’ by Michael Kuntzman. This Drexciya inspired weapon showcases thunderous kicks, snappy snares, and extra-terrestrial synth pads, as well as a poignant acid line that serves as the icing on top. Perhaps the most minimal track on the compilation, ‘Free Mike’ is an obvious example of the virtue “less is more.”