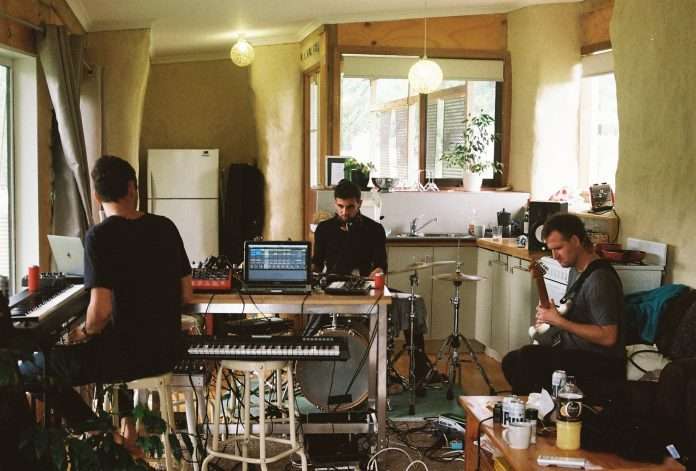 Apollo are delighted to welcome the return of Australia duo Albrecht La’Brooy AKA Sean La’Brooy and Alex Albrecht with their blissful new album ‘Healesville’ recorded in a mud-brick hut on a strawberry crop in the Melbourne countryside.

‘Healesville’ follows on from the bucolic wonder of their Apollo debut ‘Tidal River’ which took inspiration from the duo’s visit to the beautiful Wilson’s Promontory (a remote national park on the South East coast of Australia).

“Late last year, we trekked out to a beautiful mud-brick studio located next to a large strawberry crop in Healesville,” Albrecht explains. “We spent a few days capturing the feeling of the slow-paced, relaxed surrounds: The wildlife, the strawberry pickers, the sounds of the night, and improvising a response to them with music we felt suited.”

Setting up their favoured musical equipment, which included two pianos, a Waldorf, a Nord and a clutch of microphones the long-form improvisations began.

“The physical construct of the hut imparted a warm and acoustically interesting environment to record in,” Alex explains. “It also allowed us to be as close to the strawberry crop itself – we positioned a mic out the window to capture the recordings of the sound outside. During one of the sessions, a harvest was taking place, and you can hear tractors passing and workers talking and laughing in the recording.

Recording the album proved to be as relaxing and civilised a process as listening to it: “We cooked nice dinners, enjoyed good wines, and took plenty of walks through the landscape to break up the sessions,” Alex shares. The resulting record is one of quietly sozzled majesty – a delicate fusion of ambient electronic textures, live instrumentation and field recordings that beguiles and soothes the listener in these troubled times.