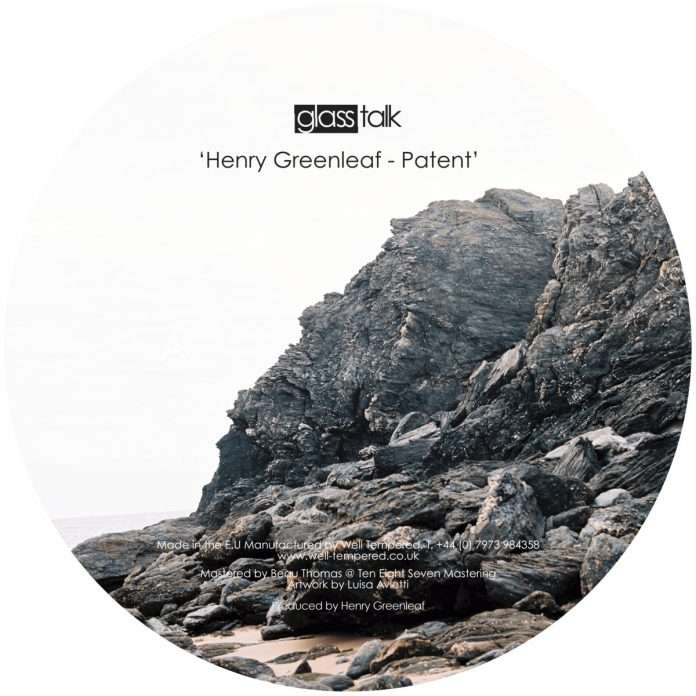 Following on from the release of a spilt EP from rising stars Gramrcy and Gaunt late last year, GlassTalk Records returns in 2019 with the sophomore EP from Bristol’s Henry Greenleaf, “Patent”. The unassuming producer has been making waves with his bassy 130bpm productions which seem almost custom-made for the later hours of dark club settings.

Since his debut release on Par Avion last November, Greenleaf has been focused on increasing the sonic scale and clarity of his work; something that’s apparent on the whole of “Patent” but especially on the opener, “Inch”. A true ‘creeper’ of a track, the groove and harmonic arrangement of the 3-minute build-up is somewhat entrancing but then gives way to a head-wringing breakdown.

True to his previous output, Henry doesn’t sit still stylistically on “Patent”. The EP’s second track, “Tare”, moves away from the 4×4 structures of “Inch” and into more syncopated territory previously occupied by producers like Mickey Peace or Paleman. “Tare” is a masterclass in polyrhythms with all manner of kicks, claps and vox samples skittering over each other. This deft use of drum programming is complemented by serene and uplifting synth sections, cleansing the tonal pallet before the beat forcefully drops back in.

On the B-Side, “Caved” keeps the energy and the tempos high with supremely processed high hats and a rumbling low-end landscape. Here Henry Greenleaf’s adoration of Paula Temple’s music shines through more than ever. Much like her output, it’s kind of hard to know which way is up in “Caved” with its ever-shifting palette of sounds and grooves. Speaking of her 2 recent EPs on R&S, Greenleaf mentions how he loves “the idea that the most impactful moments were happening outside of the drops. She doesn’t rely on big emotional breakdowns, catchy hooks or vocals to create a shared feeling in the crowd. These tracks are trying to scare, shock and confuse the crowd.”

Closer and EP title track “Patent” is probably the vastest song Greenleaf has created during his recent mission to grow his productions in scale. It’s a mammoth techno track with a pulsing low-end juxtaposed against some sporadic & icy synth pads.

This release solidifies Henry Greenleaf’s already hard-to-dispute status as one of the leading lights of the ‘Bristol sound’. Almost impossible to define; his work sits in that amorphous sweet spot where techno, dubstep, garage and a load of other UK influences bleed into each other to form something unique. Put your headphones on and let the grooves swallow you up.

Tracks of the Week: Electronic ConnectFM 15