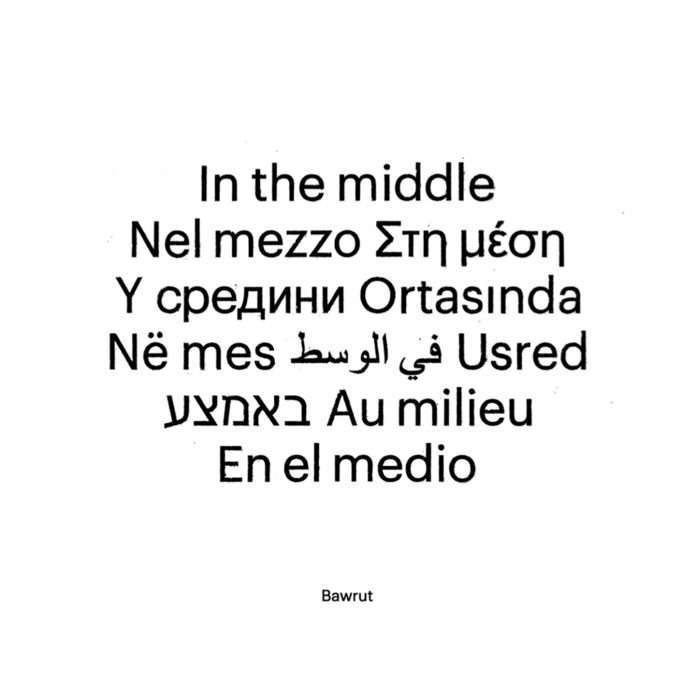 Ransom Note stalwart BAWRUT presents a new sound in his debut album ‘In the Middle’, a striking eleven-track journey through sunset pop, electronic melancholia and delusive migrations taking place around the Mediterranean.

The opus features several guest vocalists, including the stadium-packing phenomenon LIBERATO hailing from Napoli, the Moroccan-born Paris-based DJ and singer Glitter٥٥, the catchy ItaloPop artist Cosmo as well as Chico Blanco, a young singer and producer at the forefront of Spain’s new generation of independent pop music artists.

‘In the Middle’ is a reflection on recent years. A story about movement and migration around the Mediterranean but also the notion of a moving identity. It’s about the luck of the drawer, finding yourself born in the middle of the ‘West’, whilst others strive to get here with the hope of a better life. It’s about being in the middle of music and cultures and the beautiful accidents that this movement has produced over the years. Above all, it’s a celebration of the beauty of the movement to a better life, to create something new, with hope and optimism whatever the circumstances. It’s a celebration of diversity and inclusivity.

“I was born in Gorizia, a city with a centuries-old, multi-ethnic identity literally split in two by a border (Italy and Slovenia) after the Second World War. Perhaps for this reason I have always felt closer and more aligned with the encounters between cultures and people, instead of the rigid idea of nationalism and the notion of a unique identity.
Through my music I try to combine languages and sounds to make a record that celebrates the union, the meeting and crossing of experiences.” – Bawrut

Perhaps the strongest and hardest hitting track on the LP, CROSSING FOR A GOLD BLANKET’s message is reflected in the loops that never quite close, giving a sense of instability, shaping a dark digital sea with a refugees’ makeshift dinghy about to capsize at its centre. The morse code S.O.S. announces the end of the struggle before a risky rescue. “The song ends between hope and uncertainty”.