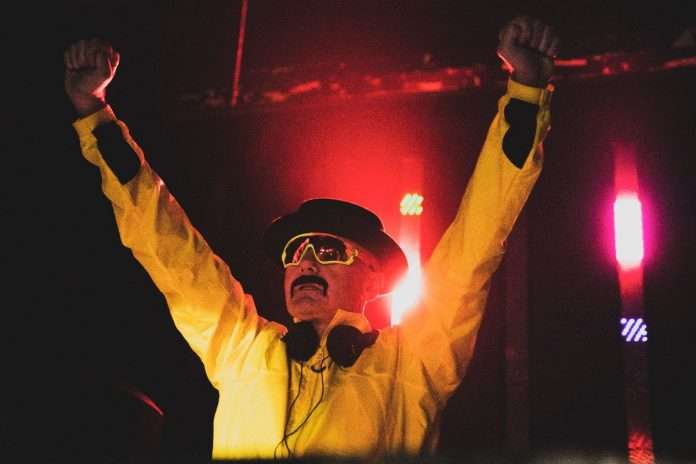 The enigma that is Klaus Blatter has just announced two live shows for December which include the legendary Berghain club in Berlin on December 4th and Corsica Studios in London on December 19th, alongside revealing a Prins Thomas remix for his latest single ‘Space Girl’.

After storming sound systems with his eccentric ‘(I Find Myself Surrounded By) The Lunatics Of Acid House’, which garnered heavyweight fans including Rhythm Masters, Erick Morillo and Laurent Garnier, the Dortmund native has returned from the studio with the equally impressive ‘Space Girl’ co-produced by Danny Rampling & Steve Mac alongside remixes by Todd Terry & Prins Thomas.

Trippy, undulating, drawn out synths lines effortlessly glide around a prominent kick, as Klaus serves up a distinctive top line and the acidity of the track kicks in, tangling you further in his decadent cosmo-web of dancehall sin!

In his own words, “Space Girl is a song about a beautiful young lady I once knew who I was infatuated with, when, as a youth, I opened the legendary Technosphere club in the city of Dortmund on the industrial Rhine. She had no time for me initially, but I pursued her with zeal and made her my lover. Unfortunately, her young life was cut short when she tragically drowned in the lake. Sometimes when I walk along the banks of those cold, frozen waters, dusted in shimmering moonlight, I look up to the stars and believe I can hear my beloved Clara calling me: ‘Klaus..’ she is for saying, ‘there will never be another like you, my darling Klaus…’ Then I laugh at my childish sentiment. Ha! ”

Klaus has been a pivotal influence on the development of electronic music, but has received little recognition for his work. He’s been the catalyst for key events that changed music history, but his name is absent from the history books. His enthusiastic acolytes call him a pioneer. His detractors claim he’s a charlatan and a fantasist.

There are many other instances at key points in music history where Klaus was a catalyst for an important development in the culture. These will become self-evident in the assorted interviews Klaus will be granting to the media over the coming months, and in the TV documentary that’s just been commissioned about Klaus’s life and times.

Klaus made his comeback live appearance at Glastonbury this summer and will be announcing a UK live tour imminently.