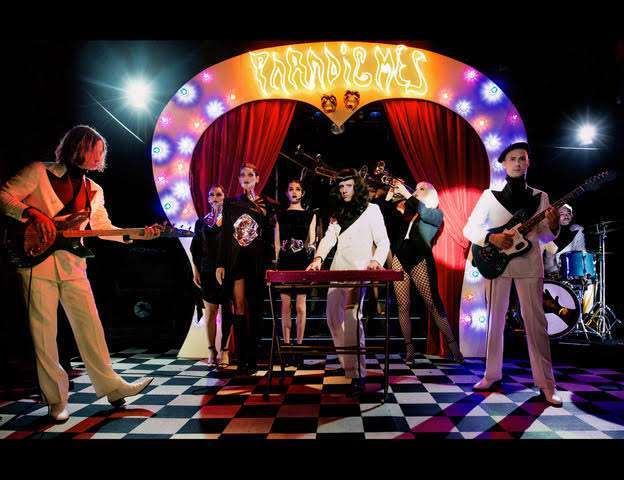 Pioneers of French pop’s nouvelle vague movement, La Femme make a striking return with their brand new single ‘Paradigme’. The track comes ahead of their upcoming third album, the follow-up to 2016’s ‘Mystère’ which was certified Gold in France.

‘Paradigme’ is an immediately alluring welcome into La Femme’s distinct style. It’s an arresting concoction of all of the band’s finest traits: captivating melodies, effortlessly cool vocals, a surging, old school brass arrangement and a towering hook. It’s luminous, life-affirming sound contrasts the darkness of its existential lyrics. The poetic chorus translates as, “During the night, the paradigms fade away, masks come off to celebrate void and lunacy / Into this enigma we call life, I want to run and cry.”

‘Paradigme’ is launched alongside an official video, which is set opposite the historic Chartier restaurant in the 9th arrondissement. Shimmering with Parisienne chic, La Femme’s glitzy, glamourous big band performance is infused with an otherworldly quality courtesy of the mysterious female vocalist’s attention-grabbing charisma.

La Femme are focused around its core trio: Sacha Got, Marlon Magnée and Sam Lefèvre. They produce their own music which they release on their own Discque Pointu label, in conjunction with the French independent music distributor IDOL.

La Femme released their debut album ‘Psycho Tropical Berlin’ in 2013, which reached Gold status and earned the band the Album Révélation of the Year award at the Victoires de la Musique (France’s equivalent to the BRITs or the Grammys). They’ve since released a succession of irresistible singles including ‘Sur la planche 2013’, ‘It’s Time To Wake Up 2023’ and ‘Où va le monde’. Having also sold-out the Zénith Paris arena and headlined the O2 Shepherd’s Bush Empire, La Femme remain quite unlike anyone else.

Giant Swan announce new EP “Do Not Be Afraid Of Tenderness”+...