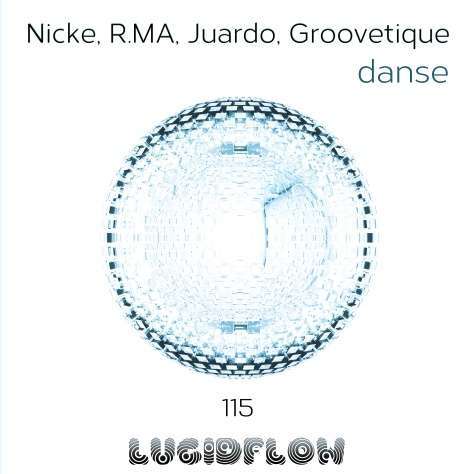 Releasing next on Lucidflow is a package featuring four new names to the label; Nicke, R.MA, Groovetique and Juardo. Little is known about this quartet of Swedish producers but what is undeniable fact is their ability to lay out some serious percussive grooves.
Leading off the ‘Dansa’ EP is Brooklyn Swag, featuring Nicke, R.MA and Groovetique on production duties. Already a staple in Lucidflow co-owner Nadja Lind’s sets, it is 100% tracky material. The kick punches hard, driving a simple breakbeat that sits underneath it, while a low bass line writhes down low and a held airy tone drifts up above.
The following three tracks feature Nicke, R.MA and Juardo at the controls. Like ‘Brooklyn Swag’, low end also plays a significant part in title track ‘Dansa’, with the every first and third kick rumbling with a long tail. Structurally, it is all about building and shifting the percussion. A simple held chord adds an extra dimension halfway through but it is the sleight of hand manipulating the beats behind the scenes that provides all the momentum.
A mechanical heavy clunk underpins ‘Petrumode’, moving with clockwork precision as a half remembered Mediterranean melody filters in and out over the top. From there we move into the jungle of ‘Tattare’, the sense of the unknown exotic encompassed by the mutant organic bass line and wildlife chatter.
Truly for the groove enamoured, ‘Dansa’ hits the digital shelves on 12th Sept.2016.