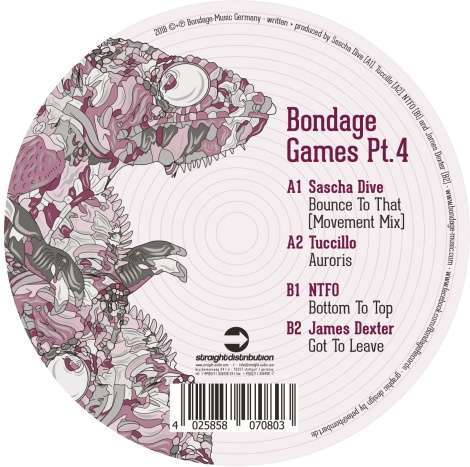 German label Bondage Music delivers the fourth instalment of its ‘Bondage Games’ series this January featuring four deep house cuts from Sascha Dive, Tuccillo, NTFO and James Dexter.
Leipzig-based label Bondage Music’s various artist series ‘Bondage Games’ has featured tracks from Pornbugs, Mihai Popoviciu and Markus Homm and part four of the series offers up four tracks from another high quality range of artists. Sascha Dive’s longstanding career has seen releases on Cocoon, 8bit and of course his own Deep Vibes, whilst Tuccillo has remained at the forefront of electronic music with his Unblock Label and regular appearances at Fabric, DC-10 and Space Ibiza. Meanwhile, NTFO have established themselves in the house music scene helming their Sintope imprint and James Dexter’s accomplished productions have been released on Dessous and Little Helpers, whilst running Inermu alongside Los Pastores.
Sascha Dive opens with ‘Bounce to That (Movement Mix)’ which delivers organic drums, airy atmospheres and mesmerising synthesiser melodies, whilst Spanish producer Tuccillo contributes a grooved low-end, rolling hi-hats and smooth chord progressions with his track ‘Auroris’.
Romanian duo NTFO’s ‘Bottom to Top’ follows, delivering a rumbling bass line with an array of hypnotising mid-range motifs before London-based James Dexter closes out the release with ‘Got to Leave’, which provides sharp percussion, glitched synth rhythms and thick ethereal pads.
‘Bondage Games Pt. 4’ drops on Bondage Music on 12th January 2018.
Tracklist:
1. Sascha Dive – Bounce to That (Movement Mix)
2. Tuccillo – Auroris
3. NTFO – Boom to Top
4. James Dexter – Got to Leave