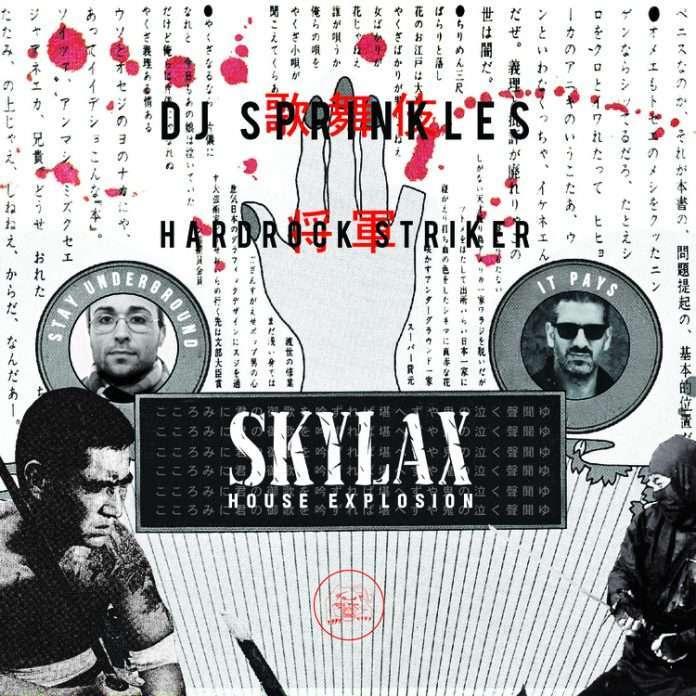 Eight years since A Short Introduction To The House Sounds Of Terre Thaemlitz, and a long, fruitful relationship thereafter, DJ Sprinkles and Hardrock Striker begin a new project, teaming up as SKYLAX HOUSE EXPLOSION (S.H.E.)

A nod to Thaemlitz’ work as Kami-Sakunobe House Explosion (K-S.H.E.) that started in 2006 – the critically acclaimed album for which, Routes Not Roots, was reissued on Skylax in 2011 – S.H.E. presents a compilation celebrating the run of Skylax Records which started in 2004 by DJ and producer Hardrock Striker. Constantly ahead of the curve, whether pre-empting the revival of Balearic, poolside vibes, or proto house and electro boogie, he and the Skylax crew have cultivated a sound that looks forward with a respectful nod to the histories of Chicago, Detroit, NYC, and other vital dance cities. The two members of S.H.E. take on a mix either side of the CD, which accompanies a three-piece vinyl compilation featuring previously unreleased music curated by DJ Sprinkles and Hardrock Striker, owner of the label. The compilation will form a template for future projects under S.H.E., which is one in a number of outings partnering Skylax Records and Comatonse Recordings, the label run by Terre Thaemlitz since 1993.

Over the years, Skylax has supported trans house producers such as Lady Blacktronika, most recently, Octo Octa and has reissued a series of T erre Thaemlitz records that were previously hard to come by – and in some cases, unknown. Queerifications & Ruins, the collection of DJ Sprinkles remixes released on Mule Musiq in 2013, also features Hardrock Striker’s MotorikLife; the DJ Sprinkles remix making an ominous twist on Martin Luther King’s famous words at the Washington Monument.

For years DJ Sprinkles been synonymous with the finest mixes of deep house in existence; setting the absolute bar for early 90s NYC joints on the Sally’s II Tribute Mixtape, revealing the incredibly broad Sprinkles range in the Module Party mix series and most recently in 2013, Where Dancefloors Stand Still, shining a nuanced light on the fuzoku laws in Japan. On the first disc of this mix CD, Sprinkles channels an all at once energetic and subdued sonic pallet – much like her work as Kami-Sakunobe House Explosion (K-S. H. E) – presenting a mix that leans heavily on the sound of SK YL AX RECORDS. Very much the straight-up house that the label is known for, but saturated in references to Paradise Garage, The Loft and the ballrooms of Midtown Manhattan – the lens through which DJ Sprinkles has always conveyed the material realities of domination, discrimination and violence. In parts, the mix belies the insistently deeper mood of Sprinkles shows in recent years, but this is by no means an unfamiliar approach; Terre Thaemlitz has always maintained varying guises, genres, dynamics and styles at once, often standing in opposition to one another.

On disc two, Hardrock Striker draws from his label signees of the more recent past, such as Jason Grove, Octo Octa, Fuckthegovernment.Ltd and Urban Inc. In complimenting the mix from DJ Sprinkles, Striker packs more of a bag for the upbeat parties he is known for in Paris, while not straying too far from “deep” sounds that are allied with his label. The mix features friends from the back catalogue of Skylax as well unheard tracks coming soon on one of three exclusive vinyl releases. Having been a dedicated producer and label-head for two decades – first with Parisonic – collaborating with a vast array of producers, he introduced many of them in the music game such as Simoncino, Nick Beringer, FTG, and Sameed. Here he unearths some overlooked gems from the last two decades, before ending with his work on the Peter Black & Hardrock Striker record, Dreamtime.

House music is ubiquitous in clubs around the world. Few institutions and imprints have stayed afloat in its short lifetime, so for a label to be celebrating with such an ambitious and extensive project, it’s fair to say: Stay underground, it pays.