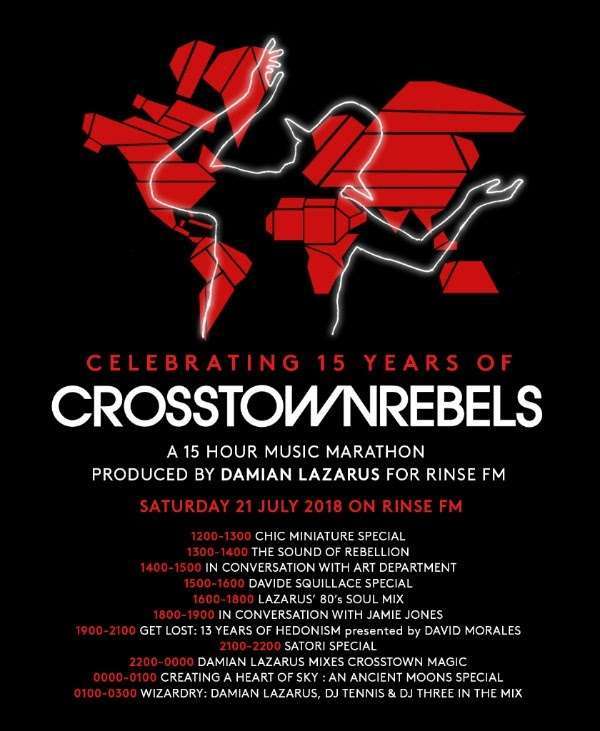 “It seems like only last week that I was sat on my living room floor with hand written words on scraps of paper trying to figure what to name my record label. However, it was 15 years ago, and since that day back in 2003 we have released over 200 singles and almost 40 albums on Crosstown Rebels. That’s well over a thousand amazing tracks that I am proud to have been able to release to the world. To celebrate I have created a 15 hour marathon of radio shows and mixes which give a unique insight into Crosstown Rebels and the people and the music that make it so special. The traditional gift for a 15 year anniversary is crystals, which are a great source for me to look into and dream up the future.” Damian Lazarus – Crosstown Rebels founder

Curated by Lazarus, the day will include shows from some of the label’s most important artists. The legendary David Morales will present an exclusive Get Lost Miami show, which will feature interviews with Seth Troxler, Guy Gerber and Ellen Allien as well as music from Magit Cacoon, Pale Blue, Arthur Baker and Rockers Revenge and Serge Devant. Lazarus himself has created mixes especially for the show, including an 80s special and one under his Wizardry project- DJ Tennis, DJ Three and Lazarus– which will be the very first time that the trio have recorded a studio mix together.

The Crosstown Rebels founder will host interviews with two of the imprints most important signings- in the form of Jamie Jones and Art Department. Other shows aired during the takeover will come from Chic Miniature, Satori and Davide Squillace.