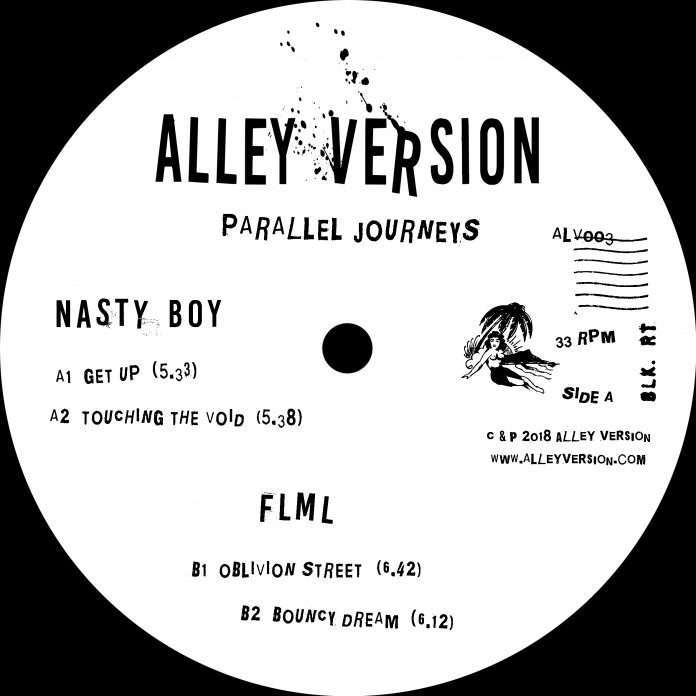 Following releases from Mituo Shiomi/Drum Machine and Takeshi Kouziki, discerning Italian imprint Alley Version is back courtesy of their third release, ‘Parallel Journeys’. a split EP that again showcases the Bologna label’s shrewd A&R skills. This time about, the label welcomes newcomer Nasty Boy to the fold alongside the label owners, FLML. Another thrilling record that’s sure to go down a treat with the heads, this one is full to the brim with discerning dancefloor vibes, the likes of which have arrived at the perfect time of year.

Opening the release is the sounds of Nasty Boy’s thrilling ‘Give Up’. A dextrous deep house journey that forces parallels with the best work of Theo Parrish and Ron Trent, this is thinking man’s house music of the very highest calibre — and is the sort of track that’s sure to further push Alley Version into the hearts and minds of the global electronic music scene.

Nasty Boy’s other original cut here is ‘Touching the void’, a more raucous track with a heavy emphasis on drum patterns and sharp, simmering synths. A heavy “banger” if a track that wonderfully showcases his nimble diversity, this one is all about a baseline that just won’t quit. Again, it’s quite inspired stuff.

The B side kicks off with FLML’s ‘Oblivion Street’. A classy jam that’s designed to tug at the heartstrings, this is another emotional-leaning deep house track that’s perfectly suited to these dark, colder nights. An analogue-heavy cut that follows a fairly well-trodden path but nonetheless still manages to captivate, it’s very much indicative of a label and an artist worth watching out for.

Culminating matters soon after is FLML’s ‘Bouncy Dream’, a good-time house record whereby piano-laden vibes cause havoc from the get-go. And as the music dies down, the EP’s title begins to make perfect sense. An all-round stunning release of great drama and complexity, once more there is a lot to love about Alley Version’s latest.