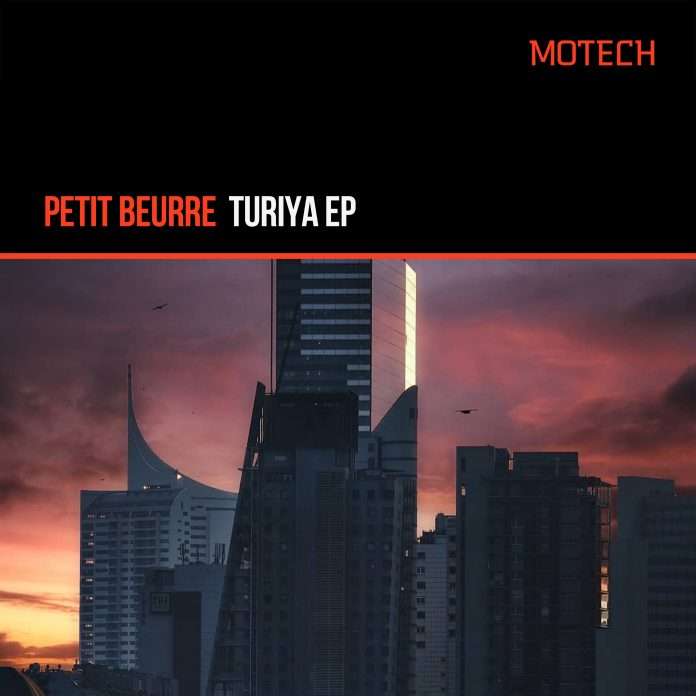 Motech continues to walk the streets of Detroit here, this round with little added depth and deliberation. Rolling right off the back of the dangerous stick of dance floor dynamite that was ‘Kanuni’, an EP of four tracks of trademark tough, rolling funk by label boss Franki Juncaj with raucous remix input from fellow Detroit man-of- the-moment DJ Bone and European powerhouse Ambivalent. New recruits Petit Beurre bring this next course to the Motech table in the form of ‘Turiya’, an EP made up of four original cuts of subliminal, melody infused techno from this rapidly up-and-coming duo hailing from Austria, who’ve maintained a steady upward trajectory since forming in the midst of the techno boom across Europe in the early 2000s.

The first offering, ‘Mini V’ kicks off sturdily with kick, ride and a simple yet inviting chord sequence. Steadily increasing key changes are delightfully disarming before a peppering of claps join the fray to add a crisp bit of extra snap to the building composition. After a salvo of layered strings and cymbals, ‘Mini V’ drops into its main groove and continues on these formidable foundations. A very strong start to their first Motech EP from the young Austrians. The EP’s second track, ‘Stringy’, takes a similar approach of melding a driving dance floor groove with irresistible, sumptuous melody. However, opposed to what the track title would suggest, this comes in the form of a tight rolling bass line, forceful synth stabs and intricate keys, along with string work deployed a lot more sparsely than expected. The final three tracks on the EP are by far the most percussive, groove driven and dance floor directed on the release.

‘Matrix’ in particular flips the formula on its head completely, with a stripped back mixture of brooding bass and low-end chords, creating a much moodier feel. Stepping back and taking an overall look, ‘Turiya’ is an EP that slots neatly into the Motech mould of Detroit Techno with punch, groove and genuine emotion all in equal measure.