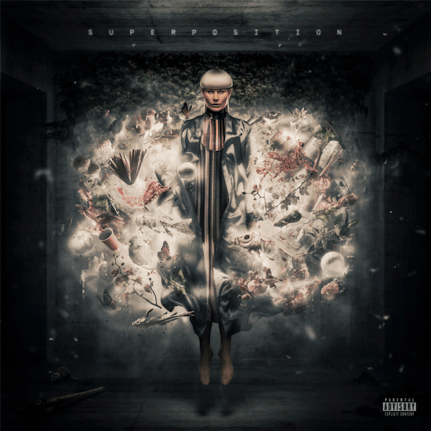 Working with UK producer Liam Howe (FKA Twigs, Lana del Rey, Ellie Goulding), ‘Superposition’ is science-inspired record, it’s a theatrical sonic page-turner: all fiery electronics, booming drums, glass-shattering vocals and pop hooks that take sinister detours into minor-key terrain. From her battle to quit smoking to the horrors of the migrant crisis and her personal loves and heartache, it’s bursting open with honesty and feeling – where every track tells a different story.

The album’s title is a nod to the superposition theory, while the more reflective, downtempo ‘Moon Sick’ in KIll J’s own wordsis “one of those nerdy songs”, which explores the idea of multiverse theories. Outside of science, that track is also a homage to Aagaard’s childhood obsession with Mariah Carey. Whilst‘Entangled’ distils her fascination with science into a slow-burning future-pop jam. For Aagaard, the main draw of physics is its potential for enlightenment. “The language in physics has its own poetry, which helps me understand the world a little bit better”, she says. “I tell myself that’s why we all write songs and create art – to try and understand that the fuck we’re doing here. I’m just trying to make sense of this crazy thing called life”.

Throughout‘Superposition’, Aagaard puts different areas of her personal and professional life under the microscope. On ‘Dead Weight Soldier’,she kills off a fictional A&R – her way of calling out the sexism she has endured in the music industry. “I’m in it for the art / You’re in it for the pussy”, she sings.

Now it’s her time to bring her Kill Jalter-ego fully to life in the form of her debut LP. “I might do chords on the piano, but very quickly I’ll move over to the computer and I’ll start producing it, because writing and producing are just so interconnected… it’s a fluid thing”, she says of the writing process. For‘Superposition’,she also worked with top producer Liam Howe. “I need someone to play ball with”, she quips.

Aagaardoffers her take on the so-called Scandi-pop sound that has rocked the music sphere in recent years. “There are definitely noir elements in what I do and also there are theatrical elements… I don’t know if it’s the lack of sun or if it’s in the water, but I’ve just always gravitated towards that kind of thing”, she offers.