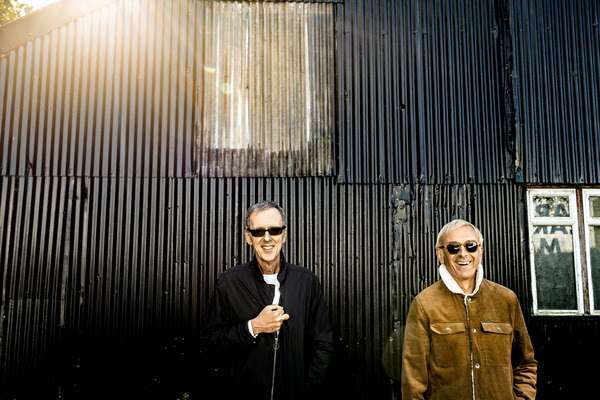 British electronic pioneers Underworld (Rick Smith, Karl Hyde) announce a triumphant return to North America – their first series of shows here since selling out the Hollywood Bowl 5 years ago. This tour coincides with the 40th anniversary of Smith and Hyde meeting and setting out on one of the longest lasting creative partnerships in electronic music.

Underworld will perform their immersive and gloriously hallucinatory 2-hour plus live sets at showcases in San Francisco, Los Angeles, New York, and Toronto plus a highly anticipated debut performance at Movement in Detroit. The setlist will include classic cuts from their storied discography as well as more recent material from their year-in-the-making epic DRIFT: Series 1 premiering on US stages for the first time.

Underworld’s journey began 40 years ago when Smith and Hyde met in the spring of 1980 while at university in Cardiff. Since then, the duo have maintained a long, complicated and prolific friendship and created a peerless body of work that includes their 1994 breakthrough dubnobasswithmyheadman through 1996’s Second Toughest In The Infants, and 1999’s sublime Beaucoup Fish, to 2007’s masterful Oblivion with Bells, 2016’s Grammy-nominated Barbara Barbara, we face a shining future, and most recently, 2019’s groundbreaking DRIFT series which saw the band record and release music weekly for an entire year before releasing the results as a majestic seven-disc box set. Outside of record releases, their work includes everything from the opening ceremony of the 2012 London Olympics to a hugely acclaimed collaboration with punk legend Iggy Pop and cinematic genius Danny Boyle. As architects of the intersection between art, rock, and electronic music, they have influenced everyone from Radiohead to Foals to Daniel Avery.

Relentless innovators, Underworld’s output reaches across all media. Their creative legacy is one that includes everything from poems, books, music and a digital diary of words and found art that has run daily for the last two decades. Their partnership with design collective Tomato (responsible for creating packaging, short films, and visuals for the band, on and off tour) has helped reenforce the band’s utterly unique aesthetic.
Smith and Hyde’s unrivalled live show has been headlining festivals and arenas across the world for years. This North American tour promises to deliver a brilliant and uncompromising synthesis of ideas and sounds that have been the best part of a lifetime in the making.

On November 1st 2018, Underworld unleashed Another Silent Way: a piece of new music that heralded the start of the DRIFT Series. That track came accompanied by a somewhat rash promise that during Series 1, Rick Smith and Karl Hyde would release music every Thursday for a year.

52 weeks later, DRIFT Series 1 collects together Smith and Hyde’s inspired, visionary work from the last year. It features music and film that spans genres and continents, that was created in hotel rooms, kitchens, tour buses, cars and studios around the world. During that year, the duo invited techno producers, economics writers, Japanese noise musicians and Australian improv trance acts to add their unique perspectives to DRIFT. The result is a collection of some of the best music of Rick and Karl’s careers.

DRIFT Series 1 was released everywhere Friday Nov 1, as a 7 CD box set that includes a Blu-ray of all the films and an 80 page, full-colour book that documents the year’s work. Also available is a single CD or 2 x LP ‘Sampler Edition’, each version inviting you spend one year in DRIFT.

This May, Underworld reveal their electrifying new live show, including two hours of classic Underworld, set to a dazzling production.
Drift Series 1 Stream: 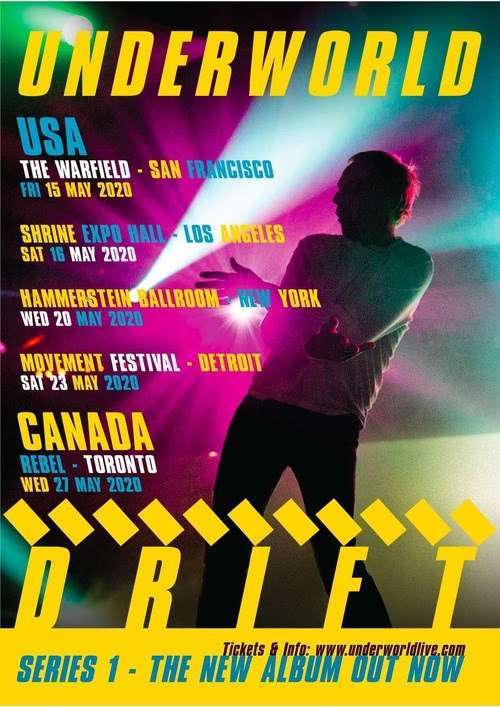