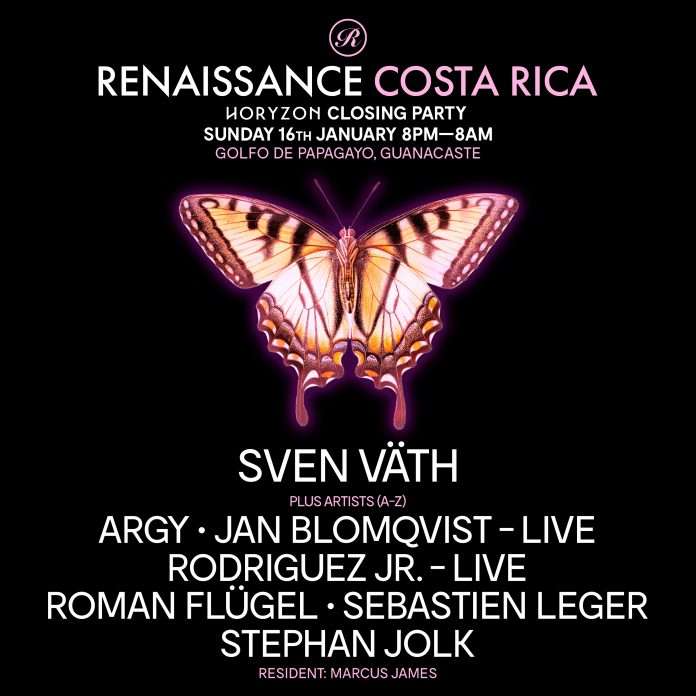 Hot on the heels of the closing party at the legendary Zamna Festival in Tulum, Renaissance once again collaborate with the Mexican club kings! A short hop to Costa Rica a week later sees them touch down in the exclusive grounds of El Mangroove Hotel, Golfo de Papagayo to present yet another world class line-up, with sound and production to match!

Running from 8PM – 8AM, the event is headlined by the incomparable Sven Väth with enviable support coming from a diverse line-up that features (A-Z): Argy, Jan Blomqvist – Live, Rodriguez Jr. Live, Roman Flügel, Sebastien Leger, Stephan Jolk and resident Marcus James. “This is our first time in Costa Rica closing out Zamna’s inaugural, 3-day, Horyzon Festival,” says Renaissance’s Geoff Oakes, “we follow two consecutive nights from Afterlife and Circoloco, so knew the line-up had to be something special. Because it runs for 12 hours we’ve carefully curated the event to keep it house and techno, albeit in a diverse way. It really is going to be something special”

Animal Crossing announce Halloween extravaganza in collaboration with You & Me