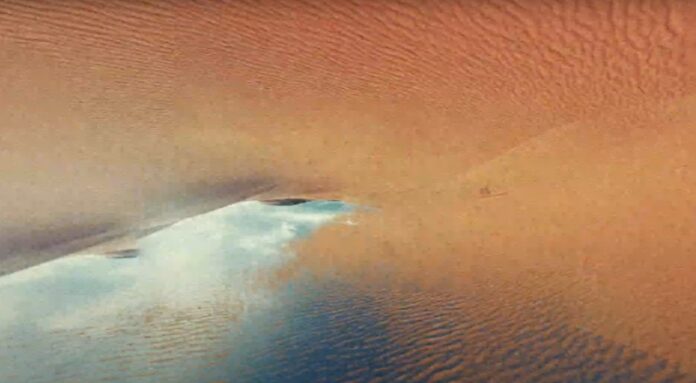 Video artist Matteo Masali explains: “The Four Walls video comes from a simple combination of aesthetic and topical factors. I was browsing Google Earth looking for abandoned and ruined cities (as was the initial idea of the video clip) when I simply wondered. If all cities due to climate change in 20 years what would it look like? I changed the inquiry of the video by addressing all the means that Google Earth grants issues such as overpopulation, desertification and gentrification, assuming in the end that if there is no turning point the Earth may become like Mars.

The preliminary scenes of the video where the scene starts with a plane crashing is a sort of figurative warning. We are all on that plane and we are crashing, especially if no action is taken in some way. When I first heard the track and talked to Pietro about the concept of the video. I realized that the whole project was driven by hope, and the Four Walls track inspired me with the idea that there is always a spark of hope, no matter what. There is always hope to rebuild.”

‘Four Walls’ is taken from Indian Wells’ recent album ‘No One Really Listens To Oscillators’; introspective, engaging, electronic music exploring the concept of “unfinished” in relation to oneself, art, architecture and surroundings. The album’s initial conceptual input came from an article in The New York Times referencing a new conceptual architectural style. The term “Incompiuto” (Unfinished) which was theorized by Alterazioni Video & Fosbury Architecture and concerned unfinished works that reveal the inability of projects to make infrastructures useful and sustainable for the community.

Indian Wells ‘No One Really Listens To Oscillators’
Tracklist

Jonnine aka a member of HTRK presents her solo EP Super...