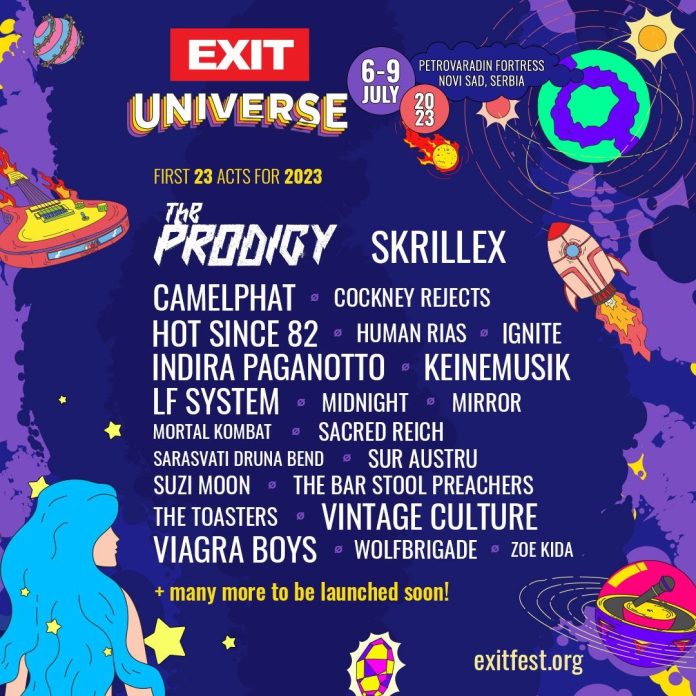 The first 23 names for EXIT Festival 2023 can be revealed today and they include the legendary return of the most influential electro-punk band of all time, The Prodigy, with tens more to come in the next few months.

After a multi-year break, the band are to return to EXIT, and it’s a place they have a rich history and deep connection with the Serbian audience. It is also an event they have said is their favourite to play in all the world so you can expect this date to be a real highlight of their comeback international tour, as the band’s founder Liam Howlett explains: “EXIT is our favourite festival! We were there (in Serbia) when a lot of sh*t went down. They hold us in their hearts as a special bend, and we love the people there.”

The EXIT 2023 programme runs from July 6th – 9th at the famous Petrovaradin Fortress and it will be headlined by electronic music revolutionary Skrillex, rock sensation Viagra Boys, the Keinemusik collective as well as CamelPhat, Hot Since 82, Vintage Culture and Indira Paganotto. The performances of The Toasters, Cockney Rejects, Human Rias, Mortal Kombat, Zoe Kida and many others have also been confirmed. A total of 23 names are ready to take their place in the EXIT Universe by coming to four of Exit’s favourite stages – Main Stage, mts Dance Arena, Visa Fusion and Explosive for this fantastic four day celebration.

The Prodigy has been a leading force in the global electronic scene for decades. Songs like “Firestarter,“ ”Breathe,“ (which premiered in Belgrade) “Smack My Bitch Up,“ “Voodoo People,“ “No Good (Start The Dance),“ “Out Of Space,“ and “Everybody In The Place“ are not only the huge part of musical history, but have been integral to the upbringing of generations around the world for the past 30 years. Their immense popularity in the region is evidenced by breaking the Main Stage attendance records at each of their performances, which are expected to be repeated next year. Their 1995 concert in Belgrade’s Pionir Hall left an indelible mark on Serbian society after the wars and sanctions, reconnecting young people with the world and providing them with a sense of freedom, rebellion, and revolution through music. This connection was deepened at the EXIT festival from their first performance in 2007 through the 2009 edition, to 2013 and 2016. The members of the most influential electro band of all time showed how much they loved the local audience when they proudly declared that EXIT is their favourite festival and that they love the Serbian people! 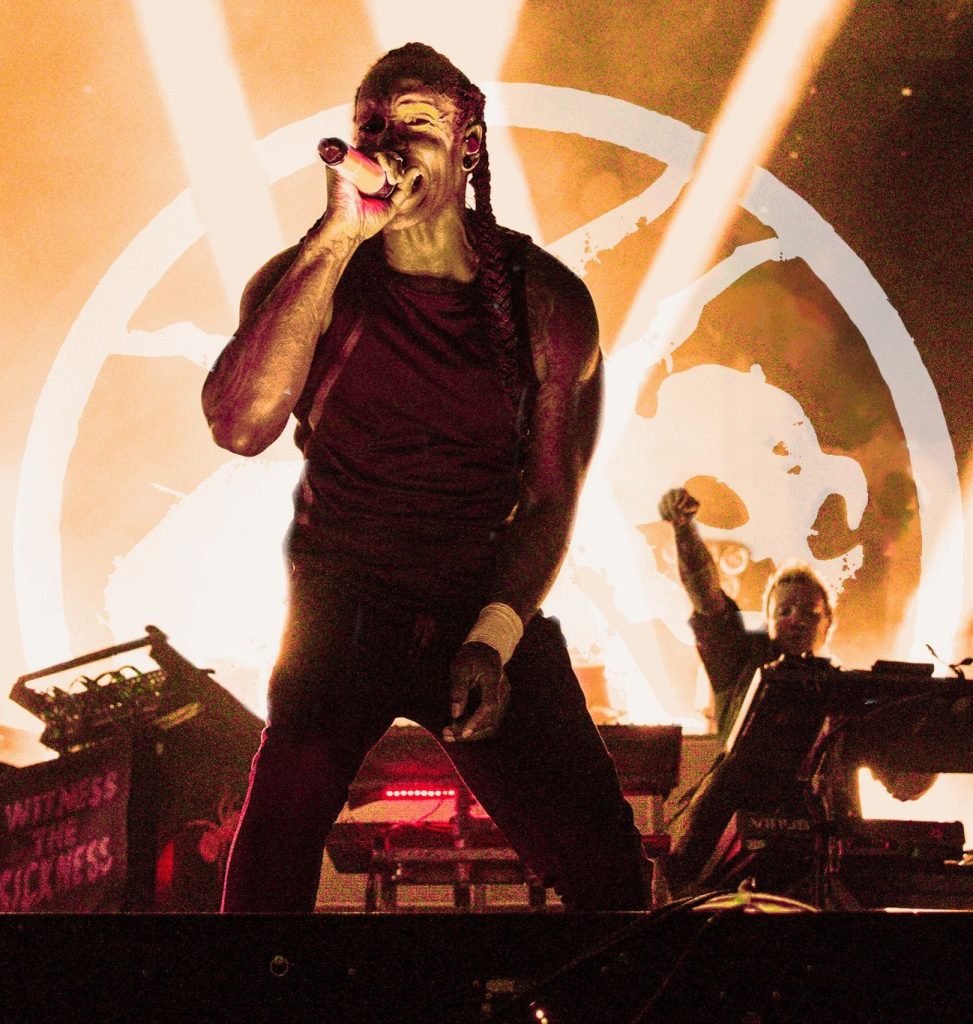 The Prodigy: EXIT is our favorite festival!

“Many thought, including the band itself, that The Prodigy would stop performing after the tragedy, but we knew this wouldn’t be the case. The comeback concerts in London showed that the fire in them burns stronger than ever, and the iconic band’s reunion with its favourite, EXIT audience, will surely be the most emotional yet. In July, we will witness a moment of true music history, which will reach its highest point with a special laser projection of Keith Flint” said the founder and CEO of the EXIT festival, Dušan Kovačević.

Skrillex, the American producer and DJ who has wild memories of Exit, will also return to the Petrovaradin fortress. After his first performance at the Main Stage in 2014, which is remembered as one of the greatest in the history of Exit, he was so delighted by the atmosphere that he decided to cancel his other performances and stay until the end of the festival. This musical innovator has eight Grammy Awards, which is a record in the electronic music scene. Releases such as “My Name Is Skrillex,” “Scary Monsters and Nice Sprites,“ “Recess,“ and collaborations with the biggest global stars like Jennifer Lopez, Justin Bieber and Diplo, Ellie Goulding, and J Balvin have redefined the entire genre. Next July, Skrillex returns to the Petrovaradin Fortress in full force and with a minimum of two more albums announced.

Viagra Boys and their eccentric frontman Sebastian Murphy, professional jazz musicians and hardcore veterans from Stockholm, are coming to Serbia for the first time, straight to Exit’s Main Stage! Their music is strongly based on the elements of parody and satire, presented at their very first EP, “Consistency of Energy,“ followed by their debut album “Street Worms,“ and last year’s LP “Welfare Jazz.“ Scottish producer/DJ duo LF System is also coming to the EXIT Festival’s Main stage – these hitmakers are known for their refreshing soul sound, topping the UK Singles Chart and earning a platinum record with their single “Afraid to Feel.“

The DJ and producer crew Keinemusik consists of &ME, Rampa and Adam Port, who have made this project one of the world’s leading house attractions. They affirmed their status at this year’s Burning Man and are coming to Serbia for the first time. The guys from the duo CamelPhat boast sold-out performances at Wembley and Hydra Arena, their own night at the Creamfields festival in the impressive Steal Yard Arena, and a Grammy nomination, and they are also coming to EXIT for the first time, at the peak of their popularity. Their nearly 20-year-long career has had many essential chapters, including the global hit “Cola,“ a collaboration with ARTBAT on the track “For A Feeling,“ and the latest single “The Sign“, created in collaboration with Tale Of Us, which reached the #1 spot on the Beatport chart. Hot Since 82 brings everything fans of house, deep house, and tech house could wish for. The loyal Dance Arena audience is perfectly aware of the kind of atmosphere he can create and that critics rightly describe his music as “the most sophisticated in the UK”.

Vintage Culture made his big breakthrough on the global electronic scene with covers of iconic songs like “Another Brick in the Wall“ and “Blue Monday“. In the meantime, many of his releases have gone platinum and reached the top of the Billboard, Spotify, and Beatport charts. He recently presented a new single, “Commotion,“ in collaboration with the legendary Maxi Jazz. Many electronic music fans still haven’t had time to fully process the masterful closing of the No Sleep Festival and Exit’s No Sleep Novi Sad Stage, both marked by Indira Paganotto’s recognisable psytechno style. She has just released a new EP, “Lions of God,“ with each and every one of its tracks reaching the top of the Beatport chart. The line-up also includes Human Rias, who became the only performer in history to both open and close the mts Dance Arena last year! First name of Pachamama stage is local Sarasvati Druna Band.

The beloved Visa Fusion Stage will host the iconic American ska band The Toasters, who are “hitting the gas, not the brakes” after four decades on the scene. They have over 7,000 live performances under their belts, while Mojo Magazine included them among the most influential ska bands of all time. The Visa Fusion Stage line-up will also include Belgrade’s Mortal Kombat, with its hard sound and provocative lyrics and the charismatic singer-songwriter Zoe Kida.

Where to buy tickets for Exit Festival?

Early-bird tickets are on sale from 87 EUR +b/f.

Tickets can be purchased here.

The sunniest Holiday Offer begins on Thursday, 15th December — with each purchased ticket for EXIT 2023, fans will get a ticket for one of EXIT’s seaside festivals as a gift.