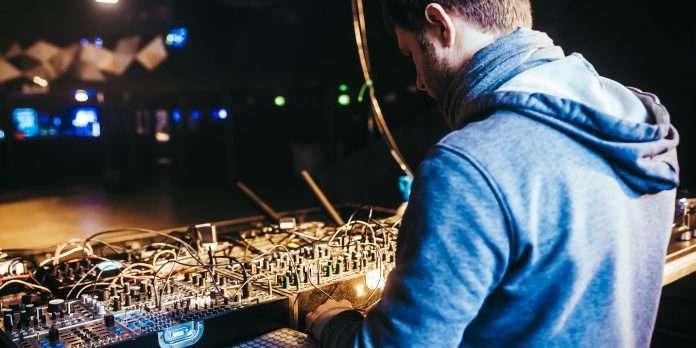 On the eve of the release of his new album ‘Les Délivrés’, an extension of his soundtrack illustrating this poignant documentary on the struggle of the Uber Eats or Delivroo drivers, Maxime Dangles unveils ‘Matin Bleu’.

Maxime Dangles entered the electronic music scene 15 years ago on the Kompakt label, collecting prestigious remixes (Moby, Green Velvet, Simian Mobile Disco, Kittin & The Hacker…). Reference of the international electronic scene, he’s renowned for his immersive and singular sound design that he shapes with his modular synths. But for the last 4 years, Maxime Dangles has slowed down his club dates to devote himself to this type of creation, to the spatialization of sound, in places such as the SAT in Montreal and to the SONARS arts and sciences project alongside researchers from the CNRS, who took him on board at the heart of their research on the islands of Saint-Pierre and Micquelon.

Nourished by the feelings of the protagonists of the documentary such as struggle, anger, stress, alienation or hope, Maxime Dangles signs here a militant soundtrack that extends the struggle of the Délivrés in a poetic way between IDM, electronica and ambient. With ‘Matin Bleu’, hope and the dream of a better life are translated with this contemplative and melancholic electronica track mixing delicate and sensitive piano notes with his singular modular sound that has made his trademark. A crossover of electronic and contemporary music reminiscent of Yann Tiersen’s latest compositions or Fabrizio Rat.

The single is accompanied by a remix by Belgian electro-pop revelation Penelope Antena,

who revisits the track in a bright and unifying minimal house version reminding Nicolas Jaar.

The result is nine tracks between ambient, IDM and electronica, exploring the story from all angles and feelings; from union demands and the struggle with “Affrontement”, an incisive track inviting reflection to raw and metallic sounds or “Révolte”, on the borders of destructured club music and IDM; from hope to dreams with the contemplative and deep “Velibre”, “Matin Bleu” and “Liberate” or the melodious “Vitesse”; anguish and disillusionment with “Operate”, the melancholic “Matin Rose” or the experimental and immersive “Mauvais Rêve”, punctuated with the voices of the documentary.

A militant sound narrative of great finesse, affirming the richness of Maxime Dangles production work and his ability to draw singular landscapes from which strong emotions emerge, following in the footsteps of Hans Zimmer, Trent Reznor and Atticus Ross original soundtracks, while exploring the most experimental side of club music.

All profits will be donated to Utopia 56, a humanitarian association that helps exiled people and anyone in distress in France. Since 2015, the association has been present in Calais to provide emergency material aid and denounce human rights violations and police violence, and through numerous actions throughout France. The association provides emergency aid on the ground for vulnerable people through outreach activities, distribution of food and shelter.

Maxime Dangles will premiere his new live show at Astropolis l’Hiver February, 11th alongside Kittin & The Hacker, SPFDJ, Volition Immanent, Infravision or Zohar. His performance will be an AV show accompanied by Dylan Cote from OYE collective, a motion designer he worked with at the prestigious Montreal SAT.